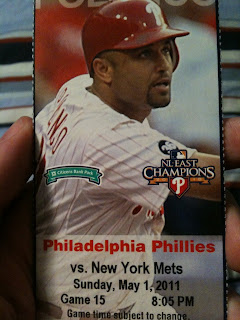 Whenever you attend a major league baseball game you'll see something that has never happened before. I've been lucky enough to attend games like that such as David Bell's cycle, the 10,000th loss, John Mayberry Jr's first-hit home run, Eric Bruntlett's unassisted triple play to end the game, Jimmy's walk-off hit in the 2009 NLCS, Roy Halladay's NLDS no hitter, etc. These were all spectacular events to have witnessed.

Last night one of those events took place that didn't have to do with the events on the field. The moments were made by those fans in attendance chanting "U-S-A" after learning that Osama bin Laden had been killed. Oddly enough our home team was playing a hated rival (although not much of one) the New York Mets. If you will remember the Mets took part in the first game back from a short break that the events of September 11 caused. I thought last night of how many Phillies or Mets were actually on those respective teams when those events happened. While a handful of ballplayers from the Mets and Phillies are still in the league only Jimmy Rollins has been with the same club since 2001. It's a night like last night that can bring fanbases together to celebrate a common goal. It can remind you that no matter how much we disagree on who to root for when it comes to sports we are all still Americans. I'd like to think that even though the Mets won last night my fellow Phillies went lite on opposing fans on our way out of the stadium. Maybe we even shared a congratulations with one another.
Posted by Joey Ballgame at 9:07 AM