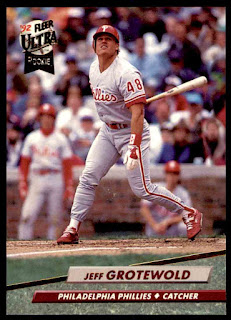 About Jeff Grotewold: It can be argued that the toughest role in sports is that of a pinch-hitter in baseball. The job basically entails trying to stay loose for a couple hours before facing a pitcher who is usually throwing at speeds approaching 100 miles per hour and/or possesses nasty offspeed stuff. Very few players achieve a great level of success pinch-hitting, but the select few who do often go on to have lengthy careers, sometimes (specifically in the National League) to the point where they rarely if ever make an appearance outside of that role. For a couple months during the spring and summer of 1992, it seemed as though Jeff Grotewold was well on his way to carving out such a niche for himself. A catcher by trade, the stocky Grotewold's pinch-hitting prowess caught the attention of the entire baseball world after one particularly hot stretch, but he'd fade back into obscurity shortly thereafter.

Jeff Grotewold's journey in professional baseball began quietly, as the Phillies signed him as an amateur free agent out of the University of San Diego following the 1986 season. His first pro season was spent with mid-level "A" Spartanburg in 1987, where he hit .252 with 15 home runs and 70 RBI in 113 games. Grotewold would slump to .219 with six homers and 39 RBI in 125 games for high "A" Clearwater in 1988, before hitting .262 with six homers and 66 RBI while splitting the 1989 season between Clearwater and "AA" Reading. In 1990, Grotewold enjoyed his finest pro season to date, hitting .269 with 33 doubles, 15 home runs, and 72 RBI in 127 games for Reading. Those numbers were enough for the Phillies to name Grotewold their Paul Owens Award winner as the organization's top position player. Grotewold moved up to "AAA" Scranton/Wilkes-Barre in 1991, but appeared in just 87 games during an injury-plagued season. He returned to Scranton/Wilkes-Barre the start of the 1992 campaign, but didn't stay there very long. When Dale Sveum went down with a shoulder injury a week into the season, the Phillies came calling.

The lefthanded hitting Grotewold's Major League debut came on April 12, 1992, when he struck out as a pinch-hitter in the eighth inning of a 6-1 loss to the Pittsburgh Pirates at Veterans Stadium. He would get his first MLB hit two nights later with a pinch-hit RBI single against the New York Mets at Shea Stadium. It would be a common theme for Grotewold, who made 11 plate appearances during his first month in the big leagues, all as a pinch-hitter, going 3-for-10 with a walk. After a brief demotion to Scranton/Wilkes-Barre, Grotewold returned to the Phillies in early June. He would continue to be used exclusively as a pinch-hitter, save for a brief appearance at first base late in an 8-1 blowout loss to the Montreal Expos on June 24. Given the role in which he was being used, it seemed as though it would be impossible for Grotewold to make much of an impression, but his shining moment would soon arrive.

On July 2, 1992, the Phillies set out on a three-city, 13-game West Coast trip that would lead into the All-Star Break. The trip included two doubleheaders, the result of the Phillies having two games postponed earlier in the season while in California during the riots that followed the verdict in the Rodney King trial. The Phils lost 11 of the 13 games, including the last eight in a row. Already in last place, the trip locked the club in the NL East basement to stay for the remainder of the '92 season. There was one bright spot amid all the gloom and doom, however, and it was provided by one Jeff Grotewold. Against the San Francisco Giants at Candlestick Park on July 6, Grotewold connected for his first career home run, a pinch-hit solo shot off Bud Black in the seventh inning of a 4-2 loss. The following day, the Phillies would be swept in a doubleheader, losing by scores of 8-7 and 10-6. In the first game of that twinbill, Grotewold grounded out as a pinch-hitter in the sixth inning, but he went deep again in the nightcap, this one a solo shot off Mike Jackson in the seventh inning while batting for Don Robinson. It was lucky sevens again for Grotewold the very next day, as he stepped to the plate as a pinch-hitter for Curt Schilling with one out in the seventh. He proceeded to blast a two-run homer off John Burkett to tie the game at 3-3, but again it wasn't enough as the Giants went on to win by a score of 4-3. Though Grotewold did not equal the record of homering in three consecutive pinch-hit appearances, he was the first player to hit three in a three-day span.

The home run binge set Grotewold off on a tear in which he collected seven hits in 11 plate appearances, all as a pinch-hitter. On July 30, he singled while batting for Cliff Brantley in the seventh inning of a 7-2 loss to the Expos at Olympic Stadium. He stayed in the game to play left field and struck out to end the game. Little did anyone know that Grotewold's pinch-single would be the next-to-last hit he would collect in a Phillies uniform. From that point through the end of the 1992 season, Grotewold had one hit in 32 at-bats to finish with a .200 batting average in 72 games. Of his 75 plate appearances, all but five came as a pinch-hitter. Grotewold saw action in one game at first base, two behind the plate, and two in left field, the latter of which included his only start on September 16 against the Chicago Cubs at Wrigley Field.

Though Grotewold certainly had his moments for the Phillies in 1992, he was fighting an uphill battle when it came to earning a spot with the club during Spring Training in 1993. The Phils had an all-star catcher in Darren Daulton and first baseman in John Kruk, both of whom hit lefthanded. With the corner outfield positions featuring platoons of Pete Incaviglia/Milt Thompson and Wes Chamberlain/Jim Eisenreich, there simply wasn't a place on the big league roster for Grotewold. Thinking he may be better served with a fresh start elsewhere, the Phillies shipped Grotewold to the Minnesota Twins on March 25, 1993. In return, the Phils received Mica Lewis, an infielder who never made it higher than "AA" and was out of pro ball by the following season.

Grotewold's fresh start never materialized in Minnesota. He spent the entire 1993 season with "AAA" Portland, hitting .252 in 52 games. Granted free agency following the campaign, Grotewold signed with the Detroit Tigers for 1994, but was released near the end of Spring Training. He'd spend the '94 season in independent ball, splitting time between the Duluth-Superior Dukes of the Northern League and the San Bernardino Spirit of the California League. Grotewold got another crack at affiliated ball in 1995, when the Kansas City Royals signed him. He would return to the Major Leagues that season, hitting .278 in 15 games for the Royals and re-signing with the organization for 1996. Grotewold hit .278 with 10 home runs and 51 RBI for "AAA" Omaha in '96, but did not make any appearances with the parent club in what turned out to be his final professional season.

Personal Recollection: For a while there, Jeff Grotewold just seemed like your basic forgettable player during a forgettable season. There weren't many opportunities for him to play, and he didn't really do anything of note when he did get in there. Then, he went nuts for a few days in San Francisco. It was a really cool thing and you could tell how much his teammates enjoyed it, even though they were going through an absolutely horrific stretch of baseball at the time. Grotewold was evidently pretty popular with his teammates, as when he was sent to the minors after his initial callup, there were some players who voiced their displeasure about it in the media.

I remember a couple bench-clearing incidents involving the Phillies in 1992. One came in San Francisco early in the season. Dave Hollins, as he was known to do, hadn't made much of an effort to avoid being hit by a pitch. Giants first baseman Will Clark took exception to this and had something to say to Hollins, leading to a heated exchange between the two. No punches were thrown, but the benches cleared and Grotewold was right in the middle of it. He was out there with his shin pads on, as he'd been in the bullpen with the relief pitchers in that little shack-type thing they stayed in when they weren't warming up at Candlestick Park. The other incident came at the Vet against the Cubs in late September. Again, this one centered on Hollins, who charged the mound after being hit in the head by one-time Phillies prospect Bob Scanlan. Hollins and Scanlan both received four-game suspensions while Grotewold was fined for his role in the melee. So maybe that had something to do with why his teammates thought so highly of him.

Another thing I remember about Grotewold was from the team's Home Companion that was released following the '92 season. For whatever reason, Grotewold had a toy train with him. He then started dancing around the clubhouse saying "I think I can!" while bobbing his head in the motion of a locomotive. The looks on the faces of his teammates were priceless, as you can probably imagine.

Until doing research for this article, I'd forgotten that Grotewold appeared in the big leagues after his time with the Phillies. Just about all of his playing time with the Royals came as a designated hitter. Guess he wasn't quite adept enough in the field to stick as a position player nor productive enough at the plate to make it as a full-time DH. But we'll always have those three days in San Francisco.

That's my story on Jeff Grotewold. Feel free to share your own recollections.
Posted by Ricky Jordan Fan Club at 9:59 AM