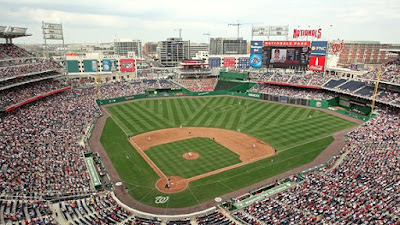 I decided recently to travel -- whenever possible -- to see my favorite baseball team play.  As luck would have it, the Phillies faced the Nats on Memorial Day.  Washington, DC is a reasonable drive from the Delaware Valley and let’s face it -- the Nats have such a weak following that attending a game down there is really like attending a Phillies game at a “satellite” stadium.

And I will admit -- I was pretty excited to finally be at a game where Chase Utley was in the line-up.  And to make the holiday even better, it was also a Halladay.

After picking up a friend and her 10 year old daughter from their hotel where they had stayed for a weekend of site-seeing, we ventured to Nationals Park.  Located in the Navy Yard region of the city, Nationals Park is surrounded by newly-developed, high-priced condominiums.  There’s not much else going on around there.  After parking ($15 for a lot four blocks from the stadium), we entered the park.  We met up with the rest of our group, including a firefighter from Alexandria, who had been kind enough to secure our tickets weeks prior to the game.

We walked around and watched Halladay stretch by the visiting team’s bullpen.  We observed Rich Dubee sit and watch Halladay stretch.  We had our picture taken with George Washington and Abraham Lincoln.

We reached our seats and the first question the 10 year old asked was, “Is there a Chickie’s and Pete’s here?”  What can I say?  That’s my girl!  I taught her everything I know about going to a Phillies game at Citizens Bank Park.  Is it wrong to admit that I’m looking forward to the day I can have an adult beverage with her at the bar in C&P?

While there is no C&P at Citizens Bank Park South, there is a Hard Times Café, which I was introduced to last year while on a trip to western Maryland.  They have four types of chili that they serve a variety of ways.  My favorite is the Terlingua chili over tater tots.  But I digress.

Our seats were a whopping $10 each in section 228, which is probably equal to being in the 300 level at CBP (and cheaper than standing room tickets at CBP).

The game started a little slow and the Phillies were behind in the score, but eventually caught up and passed the Nationals.  Then the Nationals tied and got ahead.  Then we tied and passed them again.  Halladay started; Contreras and Bastardo visited; Madson sealed the deal.  Wilson Valdez took over second base late in the game.

I will give that loser team credit for two things:  they assembled a beautiful park and paid awesome tribute to our military.  On other levels, they failed.  How does a ballpark run out of ice?  Or bottled water?   It was 95 flippin’ degrees, for crying outloud.  I’m sure the Nats concessions will find some way to blame their inadequacies on the Phillies and the fact that the Phillies following nearly sold out the stadium.

It was great to see the team win and it seemed to shut up the Nationals fans who really enjoyed immensely when their team was ahead.  And no, I’m not going to skim over Jayson Werth.  He was there, of course, and performed poorly.  His entrance song is … get this … “November Rain” by Guns N Roses.  *scratching head*  Really?  He was booed loudly by the crowd (including me and the 10 year old).  Some silly Nats fan said something like “why are you booing him?  He got your team a World Series ring.”  My response?  “He was part of a collective effort.  And then he let greed takeover.  You won’t be attending any postseason games in this ballpark.”  Oh yea, and Matt Stairs was there, too.

Special shoutout:  to the firefighter who scored us seats in the shade.  He might be used to scorching temperatures, but this Jersey girl is not.
Posted by BL Chris at 9:46 AM