Not enough for two columns 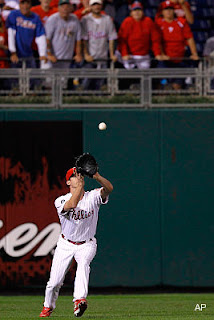 After the world went nuts over Wilson Valdez winning a game I thought of how pecular and random some of these late inning games tend to become. That same game saw Carlos Ruiz playing third base. Last year we saw Roy Oswalt shag a ball in the outfield while Raul Ibanez manned first base. This made me think of what would happen if you randomized your positions and lineup to start a game. I took the 25 man roster and had Random.org assign a number to ever player and whoever came up 1-9 I assigned them those positions on the baseball field. I then randomized the lineup and here is what I came up with

That is bonkers that on a lineup consisting of 6 pitchers none of them were assigned the number to make them the starter. I think most of the production from this lineup would come out of the 6th position. This also leaves the bullpen with mainly starters but we would have one hell of a bench.


Over the weekend I was listening to sports radio and the topic of discussion was who to keep and who to sign after the 2012 season. The names on the table were Jimmy Rollins, Cole Hamels, Roy Oswalt and Ryan Madson. The majority of the callers said Cole Hamels and I agree but they also said Ryan Madson which I disagree with. In terms of Jimmy Rollins there were a lot of opinions most of which were divided between keeping Rollins or trying to sign Jose Reyes. Out of the two I would rather keep Rollins even though Reyes is a better hitter he would command more salary.

My solution to fixing the SS situation while keeping the payroll low would be to trade Ryan Madson now. The closer position commands a high salary in regard to the amount of innings they put in. Plus the save is an overblown stat. (which is a bad time to talk about this since Leo Nunez blew that game last night) You could promote someone from within the organization to fill that role (Stutes?) who has a low salary. What I would look for in return is a shortstop in the minors right now who is on track to be in a MLB starting lineup in 2013. I know that the Phillies have sold out 162 games in a row but the team is starting to get old and current players on the roster are going to get raises with each passing year on their contract. But what do I know I went to art school and read a book one time.
Posted by Joey Ballgame at 8:07 AM