Pigging Out in Allentown 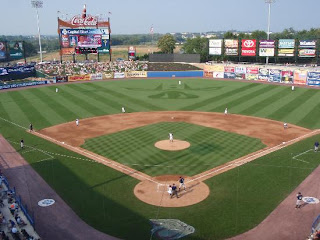 If you head up the Northeast Extension for about 40 miles from Philly, you will find a newer ballpark in the Phillies farm system called Coca Cola Park and home to the triple A affiliate Lehigh Valley Iron Pigs. Ground breaking ceremonies began on September 6, 2006 and $50.25 million dollars later the park opened on March 30, 2008. The field dimensions and wall heights are the same as the Bank, except left field is five feet deeper (334 feet to the foul pole compared to 329), center field is one foot shorter and the right field foul pole is five feet closer (325 feet in Allentown compared to 330 feet at Citizens Bank Park). There are 8,100 seats with an additional 1,900 capacity in center field with the lawn area. The scoreboard, which is the largest in all of the minor leagues, consists of a 22' LED screen as well as a 8 foot classic Coca Cola bottle, which serves as a fireworks launcher every time the Iron Pigs score a run. The architectural firm that built Coca Cola Park was Populous who was also behind many other prominent stadiums around the major leagues. Those being the new Yankee Stadium, San Francisco's AT&T Park, Minneapolis's Target Field, Pittsburgh's Heinz Field, and the renovation of Wrigley Field just to name a few.

Beer prices are very much similar to First Energy Stadium (home of the Reading Philllies) at $5.25 for a 16 ounce and $9.00 for a the big one (get the 16 oz. on a hot summer day). Food prices were a little higher than Reading, however much lower than the Bank. One signature item is the Aw Shucks Roasted Corn. I was skeptical at first with the price per cob at $3.50, but thought I should at least give it a try. The taste was out of this world with the brushed on butter, sprinkled with Parmesan cheese and Aw Shucks secret family recipe seasoning. Peter King of Sports Illustrated and ESPN is quoted as saying “Aw Shuck's Roasted Corn out in right field. Now, I've been to many ballparks in my 52 years, and I've never seen a roasted corn concession at a ballpark. But this corn was ... well, I'll just say if I had my choice between a Kansas City Porterhouse or an Aw Shuck's ear, I'd take the corn.” 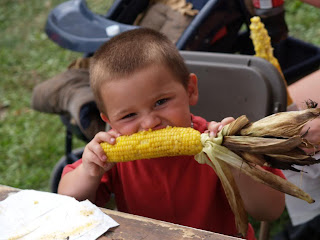 Club level seats are $14, field level are $9, and general admission are just $6 making this a place you can take the entire family and not break the bank. The Majestic Clubhouse is the spot for all Iron Pigs merchandise including a Pig Nose for only $3.00 so you can truly “pig out” every time you visit Coca Cola Park. 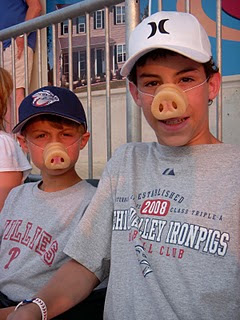 Email ThisBlogThis!Share to TwitterShare to FacebookShare to Pinterest
Labels: JMurl