The Fan In Me 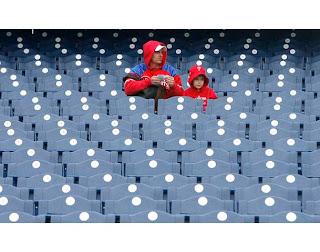 It took me a little while to build up the strength to actually write this. It has only been a few days since the Philadelphia Phillies lost game 5 of the NLDS and the wounds, the gaping, throbbing, excruciating wounds, as they say, are still open. For example, the first working title of this post was: ‘You’s Guys Suck’ (as an ode to South Philly dialect) and the other, and my personal favorite, ‘Phalling Phlat’ (see how I substituted the ‘f’ for ‘Ph’).

Last Friday night, I settled in on my living room sofa with my wife and kids. The agreement was we would watch the Phillies play the Cardinals in game 5 of the NLDS. I was excited. My kids complained because they wanted to watch Victorious and my wife was on the phone ignoring all three of us. By the 2nd inning of the game, my family took a vote and I was kicked off the island. Like Napoleon being exiled to Elba, I was exiled from the living room and away from the impressionable ears of my children and sent to my bedroom and the television there.

I couldn’t help myself. Watching the game made me angry. Nothing new for me however as a lifelong Phillies fan. I love this team. Some might say (some being my wife) I love them a little too much. But I can’t help it. Like any fan of this team, it’s in my blood.

Growing up, whenever I played baseball I imagined myself as a Phillies player. I’ve made plays at second base as Juan Samuel and turned double plays at short as Julio Franco. Shagged fly balls in the outfield as Greg Gross and handled the hot corner as the greatest 3rd basemen ever, Mike Schmidt. I’ve watched. I’ve suffered. I’ve rejoiced. Through every last place finish, every bad trade (Von Hayes immediately comes to mind), every Joe Carter World Series winning homerun, I’ve been a fan. This is my team and no matter how much hurt, anger, or frustration I have felt at the end of long losing seasons (and there have been more than our fair share of them), I’ve remained as such. The fan in me said, ‘We’ll get’em next year’. But as this season came to its shocking conclusion, I wasn’t hurt, angry, or frustrated.

My wife asked me at the end of the game, ‘Are you angry?’ I sullenly told her, ‘no’. She asked me if I was sure. I told her I was sure. She told me if I would be able to act accordingly, I could rejoin our family downstairs. I shrugged my shoulders and said sure. The truth was I wasn’t angry. I wasn’t hurt. It took a few days, some talking to myself in the car on the way to work, talking to the dog (she agreed with me that Cliff Lee losing a 4-0 lead in Game 2 was a killer) and a warning by my wife to snap out of it to come to the conclusion what I was feeling was disappointment.

I dread disappointment. As a kid, disappointment was the one emotion I tried to never cause in my mom. I was much more equipped to handle her being angry (I had plenty of experience with it) than for her to break out an ‘I’m disappointed in you’. When my mom was angry with me, I would retreat to my room. When she was disappointed, I cleaned my room. And her room. And the downstairs. Anything to get her to stop being disappointed.

As a parent, I see disappointment from the other side and it isn’t any fun on this end either.

And therein lies the lesson my mom taught me. A lesson I am trying to teach my kids. A lesson hopefully the Phillies learn from. The only way to rid the shroud of disappointment covering you is to go back at it again. To take the next opportunity and knock it out of the park (so to speak). Because no matter how disappointed she was in me, my mom made it clear, things can be righted, it was up to me. She was willing to give me the opportunity to do so; I had to be ready to show her I was capable.

I was angry in 1993 when Joe Carter hit a homerun to win the World Series. I wasn’t angry last week. What I felt about the Phillies at the end of that game as Ryan Howard lied on the ground in pain and the Cardinals celebrated was more powerful than anger. I was disappointed. I felt this way because I knew this team was capable of so much more than what I had just watched (by myself in my room) and I’m not willing to let that feeling go. But, come next April, I’m willing to give this team I love another opportunity and the fan in me knows, they’ll be ready.

Written by guest contributor Jimmy Ettele who can followed on twitter @jetts31 or other ramblings can be found at http://blogs.republicanherald.com/father/
Posted by J Murl at 4:58 PM