Breakfast with Pat the Bat 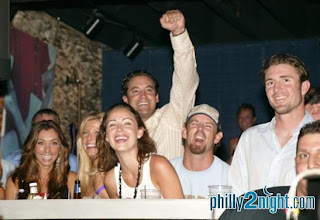 We had the chance to sit down with Pat the Bat this Sunday morning at The Fountain Restaurant at One Logan Square in Downtown Philly for breakfast.  Pat ordered the 'Taste of Philadelphia" off of the menu, a mix of peppers, eggs, scrapple, pork roll, and cream chipped beef. Pat has recently had to announce that he may have played his last MLB game due to recurrent foot issues. Burrell has a soft spot for Philly and agreed to answer and dispel a few of the legends of the former Mayor of Philadelphia Nightlife.

So Pat, it was said that when you received your 2008 World Series ring that you cried and that you stated the parade was the happiest day of your life. Could you comment on that?

Well I did cry and that's OK man. I was with the Phillies organization since the day I was drafted in 1998. There were some years where we downright stunk. I had my ups and downs with previous managers, went through prolonged slumps, and honestly did not dream in 2000 that in eight years we would be World Champions. The parade was just awesome man. Just a sea of red in the entire city.

What is the truth behind the 2003 incident at Shea Stadium when you supposedly snubbed manager Larry Bowa after coming into the dugout?

Larry was a hard-nosed no nonsense manager. His tactics with this particular team didn't work well. We just came off of getting swept by the Expos and dealing with getting berated by him on the plane ride from Montreal. We had a player's only meeting and decided to win in spite of Bo. It wasn't pre-meditated to snub him. Tyler Houston didn't tell me or make me snub him. I did it for me. Larry and I have talked about it later on and we are friends now.

I want to switch gears and talk about the lore of your escapades with the ladies of Philadelphia. I know you are single again, so hopefully you are willing to talk about this. It was reported that in the middle of the action, you stop, look into a girls eyes, and says, "Can you believe it?"
"Believe what?" she replies.
"Can you believe you're f*@%ing Pat Burrell?"

This was kinda my calling card. I am surprised it only came out once to be honest with you. I was single, in my 20s, making great money, and yea sure I was arrogant. I'm guessing the remainder of your questions are going to be about those types of stories huh? Well I'll get another one out of the way for you. After I was with a young lady at West Chester University, I did say to her, 'Go get a camera and take a picture of me. You just got  F*@%ed  by Pat Burrell. I REALLY loved talking about myself in the third person.

Pat, is there any chance you would return to Philadelphia and work for the Phillies in some aspect?

Well that depends. What is the nightlife scene like here now? The Machine is single again.