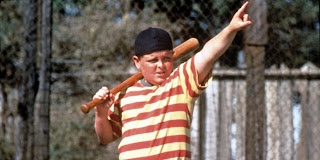 A little background on myself, my love of the Phillies and where I hope to take this column.
So, baseball was never my first love. In fact, for years it wouldn't have ranked in the Top 5 (football, basketball, tennis, golf...) Ok, so maybe it would have been number five. It wasn't for lack of interest as a kid, I was plenty interested. I just lacked the requisite skill set to succeed at any of the positions I was thrust into. In all fairness, I was a decent catcher for a number of years. I think I even made a travelling all-star team or two. But what I lack in on-field ability, I make up for in armchair analysis. I'm currently a lawyer, and that'll probably seep into my posts from time to time, hopefully in a creative way and not a "figures that's what the lawyer would say" way.
More than an unabashed love for the Phils, I have a deep appreciation for the baseball euphoria we're currently experiencing. Being 29, I can't commiserate with those who suffered through more than their fair share of our 10,000+ losses, but I can recall - in graphic detail – Toronto, 1993. For at least the past 4 seasons though, we've been serious Series contenders, nabbing the best "win now" talent, creating an environment that breeds success. Whether we've mortgaged our future is a topic for a future post, I'm sure of it, but I like the approach. Baseball is too long a slog to tinker and see what comes of it.
I haven't come up with a catchy name yet for this column, though I'm leaning toward "The Romance of Baseball," as a way to pay homage to the work of sabermetricians, while recognizing that all the statistics in the world can't replace that feeling a manager gets when he realizes his starter may have one more pitch left in him. In the end, I hope to find the right balance of analysis, prediction, criticism and praise. If nothing else, I'd like to generate some discussion, because if I'm confident of one thing, it's that Phils fans are as outspoken as they come...and I love it. Finally, if anything breaks in the intersecting worlds of baseball and law, I'll do my best to cover it here, hopefully in a way that makes sense, and never using the words "aforementioned" or "heretofore."
With that, I look forward to a busy off season, a rowdy 162, and a return to glory in the Postseason.
Posted by Big Red at 3:13 PM