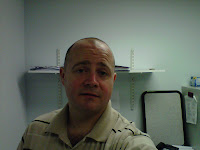 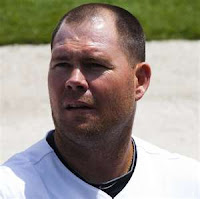 With all the excitement surrounding the Phillies move to sign Ty Wiggington, one might be apt to look past the obvious: this guy looks just like me. Well, maybe not. But a friend told me I should get a TW jersey, since I resemble him. Maybe I can finally get that MLB at-bat I always dreamed of.

Surely, there is room on this roster for anther aging utility man with questionable talent. As I peruse TW’s career stats, I can’t help but think that $4 million is a bit much for a career utility guy. He has popped over 20 homers three times (24, 23 and 22 in ’06, ’08 and ’10) but strikes out a good bit, about once every five ABs.

Assuming the aging Phillies can’t stay healthy again in 2012, Wigginton will likely see a good bit of PT. No way Polanco plays more than 130 games at third. We all know #6 is out for at least half the season, no matter what crap we’re fed. Give TW a dozen or more games at first. Chances are he’ll play some left as well. In all, we’re probably looking at about 80 to 100 games played, anywhere from 250-350 at bats. With those numbers, I can definitely slide in there for one AB.

Let’s just think about this a minute. Wigginton is 34; I’m 37. Raul was 86 this past year, so I’m still young enough. And the truth is, this Phillies team swings wildly. In contrast, my first season in senior ball, I led the team in both walks (15) and strikeouts (12, 8 of which were “looking”). I will wear the pitcher out. Hell, I might even foul a few off, just for fun. I’ll watch a couple tapes of Boggs or Gwynn, I’ll be all set.

All I need is a roll of duct tape and a distraction. Considering the boozing that takes place at a DPF tailgate, one of my colleagues can more than easily be convinced to sprint onto the field. While security tazes my pal, I'll rush into the dugout, crack TW over the head like I'm back in East Falls, and tape him up in the tunnel.

With him out ofthe way and the game on the line, I'll jump to action when Uncle Charlie turns to me and says, "Wig-uh-wig-uh-wiggingto-uh-n, get out therr."

Before anyone realizes that I’m not Wiggington, I’ll be jogging down to first base. Of course, I’ll promptly get picked off while picking my nose a foot and a half off the base. As long as it ain't Aroldis Chapman, I'll crowd the plate, take my hacks, and ultimately watch ball four breeze on by.

I'll likely join my drunken DPFer in the paddy wagon shortly thereafter. But hey, it'll all be worth it.