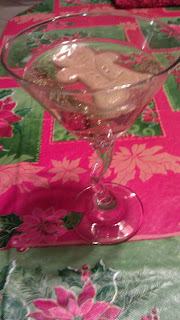 Within hours of last year’s December 14th announcement that Cliff Lee had stuck it to NY and was returning to Philly, I hurried onto the MLB Shop to score a # 33 jersey for my dad. The perfect Christmas present for the man who wants nothing. Clearly I was not the only person with this idea, as six to eight anti-climactic weeks later it arrived.
He stood in the kitchen, turning side to side and checking out his reflection in the window. Smoothing his hands down the 100% polyester moisture wicking performance mesh, he told me that I shouldn’t have. It was too expensive. He’d be just as happy with a jersey from Boscovs or “Clover”…but still there was no question he thought this one was “sharp.”
Later that month, he used the same exact adjective to describe a pair of free “In-quire” sunglasses that came in the bag with the newspaper down at Bright House.
Now THAT was a Christmas present: from my parents, a condo in Clearwater Beach for the week for any of us “kids” who could get the time off and wanted to join them. (Yeah, they’re kinda cool.) Despite it being hot as baseBALLS in our seats along the third base line, that trip was a blast.
Of course not every Phillies-related present has to involve frisbee in knee-deep Gulf water followed by Frenchy’s margaritas at sunset.
One of the best gifts someone ever gave me was for Christmas 2008. That was a very Phillies Christmas for one and all! We were basking in the afterglow, still humming Don’t Stop Believing and We Are The Champions. So when I unwrapped a framed photograph of The Moment, I could have cried. (OK I did.)
I had seen it on TV played over and over for days following, but a still shot capturing this instant was a treasure. The view is from behind Lidge who’s on his knees and just collapsing back on his ankles. His arms are raised in the air and Chooch is barreling towards him. You know the shot.
Uncle Kevin had given these to everyone that year and they were all over the house Christmas night. It was the same photo, but with varied meanings for each of us. Who did you hug first? Did you cry? Yeah you did…yeah ya did! Who did you wish were still here to see it? How good did that champagne taste right outa the bottle? (Thanks, Uncle Kev. All that from a Kinko's reprint.)
With Black Friday and "Cyber Monday" less than a week away, it got me thinking about what we give to the DPF’s in our lives this time of year. What we’d really like to do is wrap up the promise of an incredible season, right?
Since we can’t do that, we offer each other the possibility of great times ahead. Like a couple buying a block of games or buddies going in on season tickets. Nothing to really open on Christmas morning, but there are fireworks and hilarious tailgating moments and dollar dog nights to look forward to. There is hope beyond my Seasonal Affective Disorder, I mean after March.
Sure, these Christmas gifts don't have to be expensive, or even sentimental. There's always the “Crystal Flip Flop necklace,” currently featured in the online Shop for $14.99. While this fancy gem does have an “acrylic inlay with team logo,” …I’d be remiss...guys...if I did not suggest maybe getting that special lady a little something else to go with it. Just don't believe everything you read in those blurbs because she might not go nuts for the “rhinestone accents..."
What am I hoping Santa leaves under my tree this year? (Shh, just pretend you asked me.)
Frankly, I would kill for a Phanatic Pillow Pet. They are ridiculously comfortable and plush… so plush... and it would be the closest I’ll ever get to spooning a member of the Phillies organization.
Also, I think I’d find a cocktail with Phillies Party Cubes in it quite enjoyable. Have you guys seen these things? They light up! “Simply place them in your freezer in preparation for your next game day celebration…”
But I’m just saying: why wait until April? I might have one in a gingerbread-tini this December.
'Tis the off-season!
What is the best Phillies Christmas present you’ve ever gotten or given?
Posted by MegsMcG at 8:45 PM