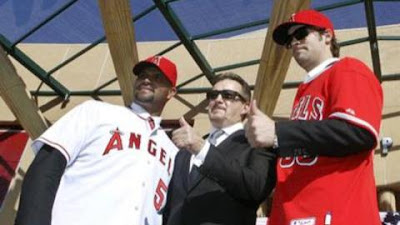 I thought only the over spending desperate NY Yankees made moves like this?

Flying a little bit under the radar of the monumental Albert Pujols signing is the fact that the Angels will be giving CJ Wilson over $15 million a season for the next 5 years. The way it looks, he will be the 3rd starter behind Weaver and Haren.

That means that he will be 36 years old by the end of this contract and though he has a winning record in the majors; to say he has the track record to deserve a $77 million contract is pushing it. Now the real concern, Wilson is only 1-5 in his post-season career on a team that made it to the World Series in consecutive seasons. The Rangers, a team that absolutely mashes the ball and plays great defense; yet he has a losing record and a 4.60 career post season ERA.

So I guess the Angels are betting on Wilson continuing his progression and becoming a top of the line starter who will dominate the AL West for the next 5 years. Good luck with that!

Although a very good pitcher, paying $15 million a year for a number 3 starter is ridiculous. Again the Yankees are the only team I know of that does stuff like this. I wasn’t surprised to read that they were in the running for Wilson, but I am surprised that they are the team that didn’t offer him a ridiculously outrageous amount of money.

Good for the Angels, Artie Moreno is flexing his financial might and proving to the rest of the league that the Angels are a force to be reckoned with. The Yankees, Red Sox, and Phillies are no longer the only big boys on the block. They now have a combined $331 million invested in Albert Pujols and CJ Wilson. I guess the Anaheim Angels are the new evil empire.