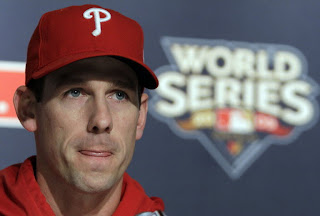 December 15, 2010 will be forever remembered in the hearts of Phillies fans.  On that day, Cliff Lee erased the worst decision Ruben Amaro Jr. ever made, by making his Ali-like return to the Phillies.  Reactively, millions of Phillies fans were thrown into a state of pure ecstasy.  As if Ruben could feel our ecstasy trip coming to an end, he called in a favor from an old friend, Ed Wade.  In case you aren’t aware, Wade was the director of the Phillies major league affiliate, The Houston Astros.  Ed Wade answered the phone and said, “Hunter Pence? Sure thing…No, no, no, Ruben, keep Worley and Brown. Just don’t forget my ring size.”

And just like that, our trip became more enhanced.  The rest of the summer was a blur.  Then, in a matter of minutes, the ecstatic feeling started to fade away faster than Cliff Lee’s 4-0 lead against St. Louis.  A few heart-palpitating days later, it was over.  We were tired.  We were confused.  It was an emotionless feeling.  Philadelphia fans did not know how to react.  We know how to react when the Eagles make another NFC Championship run and fall short to a team quarterbacked by an old, immobile, white man named Kurt, Brad or Jake. That feeling is in our blood.  This 2011 Phillies feeling was foreign.  I assume it is what heroin feels like.  It’s awesome while you’re on it.  When you come off, you’re left cold, broke and sad.

Like Smarty Jones at the Belmont, the “Sure-Thing” 2011 Phillies, were defeated.  The 2011 Philadelphia Phillies were as good as any team I could ever imagine.  Who could argue?  Our third best pitcher received Cy Young votes.  Our infield was saturated with MVP’s.  It was our year.  “Our year,” is a term coined by many sports teams.  Every year seems to be “our-year” for every sports franchise but with the Phillies, in 2011, it really was “our-year.”  Everything fell into place.  Our most feared competition found themselves golfing in San Francisco or Atlanta.  Our injuries healed.  Our hopes were at an all time high.  And then, like Apollo Creed pounding on our broken ribs, some jerk asks that gut-wrenching question, ”When do pitchers and catchers report?”

For Phillies fans, 2011 was over.  No job promotion, new baby or winning Powerball ticket could make this year a success for a true Phillies fan.  That is, in some weird way, “passion.”  Passion has a different definition for Philadelphia sports fans than it does for fans in other cities.  Phanatics relate passion to failure.  Our natural response to failure is  exerting even more passion.

This feeling of ecstasy is good.  Just ask Miami Heat fans.  They morphed from an average team into the NBA Eastern Conference All Stars during a half-hour special on ESPN. What Happened? Dirk went “Eli Manning” on you. (Eli Manning- verb. – Beating a heavy favorite with improbable play after improbable play while having an ugly face.) Be careful Packers fans.  One Ndamukong Suh stomp to Aaron Rodgers right arm and your “sure-thing” is history.  This feeling is a drug.  Don’t think it can’t happen to you.  Your parents try to warn you but you’re too cool to listen.  You’re just trying to fit in.  I know how it feels.  Take it from me, a former user, believing in “sure-things” in sports, is as bad as it gets.

With my past behind me, and my addiction in check, 2012 will be a better year.  Bring it on.  Sign Pujols. Sign Fielder.  Trade for Burrell.  It doesn’t faze me, Amaro.  I will never be as excited for a team ever again.  I am 55 days sober and don’t plan on relapsing until I can get my hands on that feeling I had on October 29, 2008. I can’t wait.  So seriously, when do pitchers and catchers report?

P.S. My producer just informed me that the Lebron James Special, “The Decision,” was an hour long.  Guess it took an hour to say that famous line, “I should take my talents to Dallas.”