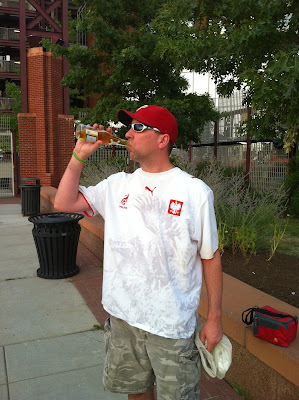 I consider myself as someone who is smart and has common sense. As a pitcher, I believed the game rested in my hands, not in some silly nonsensical superstition or ritual. So why in the hell did I get wrapped up in a series of ritual and superstitions? The answer is, it’s a baseball thing. Wade Boggs had to eat chicken every day before a game, Reggie Jackson wore the same helmet since he broke into the big leagues (he just had it painted), a whole city of Cubs fans believe they haven’t won a World Series because of the curse of a billy goat.  These are some of the tamer beliefs and rituals!

Most of my rituals started because of a good performance I had on the mound or at the plate. When getting dressed, I would always put my left side on first, my left sock, and the left shoe. When warming up, the backup catcher was my guy. I never stepped on the white lines. That was a no no. I meticulously groomed the mound and the rubber. If the opposing pitcher manicured it to his liking, prior to my first warm up pitch I had to re-landscape the mound. It was always the same series of 7 pitches during warm ups: Fastball, fastball, curve, fastball, slider, changeup, sidearm fastball. When the throw went to second and around the horn, the third baseman HAD to throw me a knuckleball. If he didn’t I simply wouldn’t catch it. I’d let it go past me,have the first baseman toss it back to the third sacker and remind him I needed the knuckler goddammit!

All of this folks, and guess what? I am not even close to the craziest. Turk Wendell would brush his teeth in the dugout in between innings, make and exaggerated hop over the foul lines, only chew black licorice during games, and pick up and pound down the rosin bag after he picked it up. Jorge Posada actually pisses on his hands and never uses batting gloves. Roger Clemens was known to bathe in the hottest water tolerable before a game and then put hot liniment on his ball bag. Kevin Rhomberg would have to touch the person who last touched him. No touchbacks!  So when he was tug out to end the inning, he had to touch that player back. Greg Swindell, a knuckleball pitcher, would bite off one fingernail and then keep it in his mouth for the rest of the game.

The rituals and superstitions have leeched into my life as a Phillies fan. I am a season ticket holder and I have a long list of do’s and don’ts before any game I attend. I guess it really starts when I leave my house. I have to put the tickets in my center console. I go to the same Wawa and get the same items prior to the game: 3 Iced Teas and 3 Tastykake bars. I park in the same lot and always the same row, fourth spot from the end. Oddly, the booze I bring can differ, but Jameson or Bourbon are my preference. There is always a roadie or walk-up beer, as it has come to be known. I finish it right outside the third base gate. I have to scan my own ticket, the usher may not touch it. There is a particular usher at the bottom of the escalator that I use and I MUST pound fists with him as we both say “Let’s get the W”. Yes, sadly I have enlisted others in my rituals. Off the escalator and a quick right turn into the men’s room, whether I have to go or not. I will always be in my seat before the National Anthem (it is a bad omen if the singers are male or mostly male). I never get up from my seat for the duration of the game. If I have to get up more than twice for any fan, I do get angry and say “Stay the hell up there!!”. After a win, I do the Kirk Gibson move when he hit the one-legged HR in the 1988 NLCS (if you don’t know what I mean, I am not sure we can be friends). After a win, I time it just right and am able to sing “High Hopes” along with Harry on my descent down the escalator. Once, I leave the threshold of Citizens Bank Bark I can act “normal” again.

Rituals and superstitions have been a big part of almost every baseball movie too. In “The Natural”, Roy Hobbs has his bat Wonderboy, that he made from a tree that was struck by lightning. Pedro Cerrano, in “Major League”, has his relic Jobu that he relies on for power and the ability to hit the deuce. “Bull Durham” has a laundry list of superstitions and rituals: Abstinence during a winning streak, sacrifice of a rooster for a cursed glove, rally caps, and wearing a garter belt under the uniform to reorient your head and getting one to pitch out of the proper hemisphere of the brain. (The rose goes in the front)

So what rituals do you have/had as a player or a fan? What are some of the crazier baseball superstitions you have heard of?
Posted by BL Chris at 10:09 PM