Sit Back While I Wax Nostalgic 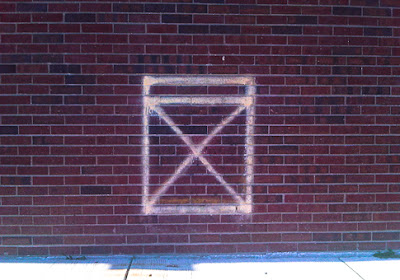 As Christmas times nears, I often get nostalgic remembering times gone by. The certain smell of a food my Mom makes for Christmas Eve, the Light Show at Wanamaker’s downtown (it still has the Eagle..it will forever be called Wanamaker’s to me), or something as simple and beautiful as a lit tree in the front window with snow falling in the background.

I am a Philadelphian. I grew up in Northeast Philadelphia in Oxford Circle.I appreciate tradition, maybe even thrive on it. My parents still live in the same house I grew up in, for 40 years now. Every Christmas Eve I go back to the old neighborhood and pass the bar where I had my first drink, and subsequently 5 years later my first legal drink as well. I see the houses my friends grew up in, the steps I hung on, and the places where my love of baseball flourished.

In the early 1980s my parents built our basement into a family room. The garage door was no more, now a brick wall. I smile every time I see it because, to this day, you can still see the strike zone box I drew on the wall with the large K in the middle. I honed my skills there, tossing any type of ball I could against that wall probably a million times I guess. Countless games of Wiffleball were played against that wall with my brother, Chris, Jason, Rob, Tom, or so many other people. I know the rules still. I bet we all would. Grounder to the garage top was a single. From the garage top to the first floor (kitchen) window was a double. From the top of the window to the cable/electrical wire was a triple and over the wire was a homer. We all emulated the stances of the players. Rod Carew, Mike Schmidt, George Brett, and Joe Morgan were some of our favorites. I learned to hit left-handed because of the nasty Wiffle curve or slider. The ball came right into my wheelhouse as I sidled up to the left side of the plate (the drain cover) as I stood there with a scowl and crouched just like Pete Rose did. Whizzing a single right by my brother’s ear.

We took it serious. Kept a scorebook, standings, and even collected the plastic baseball helmets of the teams we would wear for that game. Von Hayes led the league in homers that one summer of 1984. Rick Sutcliffe led the league with 22 wins. I would keep each players stats on an index card, transcribing the results from the scorecard to the index card. At the end of the year I would slip the index card into an old Smith Corona typewriter that my Mom used in college and painstakingly type each player and stat from our league onto them. I still have them to this day and actually have them in front of me.

So I decided to write a series about games of our youth to keep the tradition alive. The kids today slide in a PS3 baseball disc and let the computer play it out for them. It compiles the stats for them. Walk around any neighborhood in the summer today and I bet you won’t see many, if any, kids playing stepball, wireball, boxball, etc. I intend to wax nostalgic on the blog about those games and more. Games you may have forgotten, games that were called something else in your city/neighborhood/block. What games do you remember? What story do you want to tell?
Posted by BL Chris at 10:57 PM