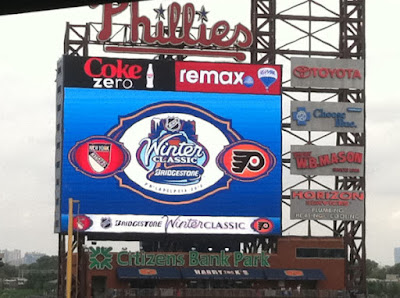 So how 'bout that? Our Citizens Bank Park in the national spotlight. (Or region north of Nascar Country into parts of Canada spotlight?)
I’m sorry, Flyer fans. That was a tough one. The flurries, the crazy third period, the penalty shot, and all of the anticipation leading up… I know.
After weeks of ice rink construction, a sellout crowd of 44,000 got to watch a professional hockey game outside. To prepare for the Winter Classic, crews hauled in hundreds of wooden planks, aluminum panels, and about 20,000 gallons of water. Coolant was pumped in from a refrigeration truck to make the ice. Even the Majestic Clubhouse Store was overtaken with Flyers black and orange…and a hint of Rangers gear.
What the hell did they do to our ballpark?
But seriously, all of this revamping had me thinking of the old days when the Phils and Birds were roomies.
The Vet (may it rest in peace) was sort of like a row home basement that two stinky brothers shared as a bedroom. One of them would go to fold up the pullout couch and the other's dirty tracked-marked underwear would be right there on the floor for all of their friends to see.
I am reminded specifically of the 2001 preseason debacle at the Eagles Ravens game. Only at the Vet (God rest its soul) would a football game be called off due to uneven turf caused by a pitchers mound and some bases.
Aside from the field, I mean turf, conditions of the Vet [removing hat and placing over heart] was all of the goings-on aside from the game. With the amount of the corporate ballyhoo surrounding today’s Classic, I can't help but laugh at the thought of such an event taking place at the Vet. [Forefinger pointing to sky.]
As we know, Veterans Stadium was originally touted as a state-of-the-art multi-purpose venue and quickly became the armpit of professional sports. Lore has it, rats the size of Chooch scurried past guys in the weight room and dingy sewage water leaked from pipes right into staff members' coffee. Holes and cracks in walls had unsuspecting cheerleaders being spied on as they changed.
Then there is my own personal memory of the 700 Level where a couple of drunk Phils fans (not you guys, but the real a-hole kind) were engaged in fisticuffs and after falling on my mom and me continued throwing punches.
What a stark contrast that is to the image of the little girl throwing back the foul ball her dad caught. That was adorable and sweet and made national news. “Handsome Dad Comforts Daughter at Ball Game.” See, where that happened is the kind of place Winter Classics are held.
But of course meaningful parent-child moments happened at the Vet. (Never Forget.) And sure CBP has had its share of intoxicated violent fools. Really, while the facilities have changed, the fans have not and never will.
I remember the first year Citizens Bank Park opened, doing the stroll-through before the game. I'll admit I was enjoying the mall experience and, well, I may have ended up inside of the Build-A-Bear Workshop. Standing off to the side was a gentleman in a nice jean short and wife-beater ensemble.
“Would you like to fill out the birth certificate?!” the girl behind the counter (who might as well have worked at Disney World) asked him in the most ridiculously cheerful tone.
Not realizing he had been standing in front of the “birth certificate station” while waiting for his girlfriend, he awkwardly held his drink and responded in THE best Philly accent one could imagine.
“I have NOW idea what's gowin’ awn.”
I giggled to myself, shook my head, and continued to ponder over the selection of Joe Boxer underwear my Phanatic should rock under his tiny little jeans.
Posted by MegsMcG at 7:06 PM