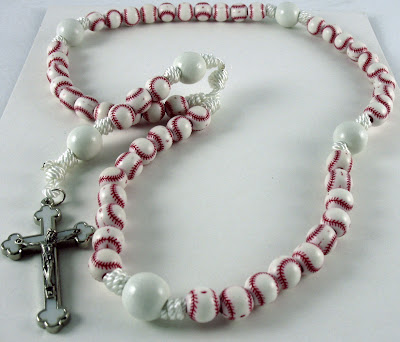 Let's face it. Baseball is a religion and frequently provides a better experience for the faithful than going to expensive cathedrals and wondering why God must pay such high rents. Indeed, I have seen more men, women, and children praying at Citizens Bank Park than I have seen in most churches, diehard fans uttering such prayers as "Dear God, don't let Ryan Howard strike out. I'll do anything, but just let the Phils tie this game and go ahead into the bottom of the 9th." Certainly a season at PNC Park (or the Vet from 1985-1992) will provide deeper insight into the nature of human suffering than re-reading the Book of Job.

Certainly Baseball has not killed as many innocent persons as religious differences have. Baseball has its flaws-its history of racism and religious intolerance-but has it ever sponsored the Inquisition? Has it ever condemned anyone-with the possible exceptions of Pete Rose and Shoeless Joe Jackson-to Hell? Has it ever slaughtered infidels in order to bring home relics? Baseball relics, such as autographs and bubblegum cards, are easily obtainable and very rarely involve the spilling of blood or the cutting off of ears. Christians have the Shroud of Turin; baseball worshippers have the retired uniform of Babe Ruth. Which object has inspired more hope, more dreams, and more enduring embracements of holiness, I shall leave to the statisticians to debate.  Religious differences divide one person from another; baseball, on the other hand, promotes brotherhood, a spirit of fairness, a respect for skillful play no matter if performed by a Jew, a Catholic, a Baptist, or even a complete atheist (although there are no atheists during a World Series.)

Perhaps Annie Savoy said it best " I believe in the Church of Baseball. I've tried all the major religions, and most of the minor ones. I've worshipped Buddha, Allah, Brahma, Vishnu, Siva, trees, mushrooms, and Isadora Duncan. I know things. For instance, there are 108 beads in a Catholic rosary and there are 108 stitches in a baseball. When I heard that, I gave Jesus a chance. But it just didn't work out between us. The Lord laid too much guilt on me. I prefer metaphysics to theology. You see, there's no guilt in baseball, and it's never boring... which makes it like sex. There's never been a ballplayer slept with me who didn't have the best year of his career. Making love is like hitting a baseball: you just gotta relax and concentrate. Besides, I'd never sleep with a player hitting under .250... not unless he had a lot of RBIs and was a great glove man up the middle. You see, there's a certain amount of life wisdom I give these boys. I can expand their minds. Sometimes when I've got a ballplayer alone, I'll just read Emily Dickinson or Walt Whitman to him, and the guys are so sweet, they always stay and listen. 'Course, a guy'll listen to anything if he thinks it's foreplay. I make them feel confident, and they make me feel safe, and pretty. 'Course, what I give them lasts a lifetime; what they give me lasts 142 games. Sometimes it seems like a bad trade. But bad trades are part of baseball - now who can forget Frank Robinson for Milt Pappas, for God's sake? It's a long season and you gotta trust it. I've tried 'em all, I really have, and the only church that truly feeds the soul, day in, day out, is the Church of Baseball"

Every five games I will 'listen' to Pastor Doc Halladay 'preach' his Sermon on the Mound. CBP will serve as my cathedral for 17-30 games every season. I guess you have your religion and I have mine.
Posted by BL Chris at 9:28 AM