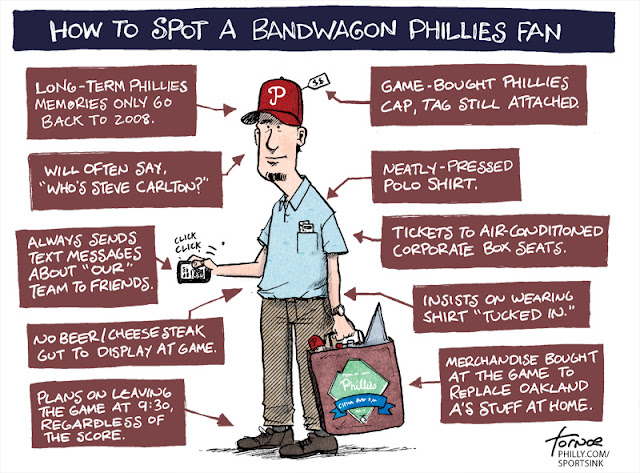 Maybe Jimmy Rollins was correct. The Phillies fans do suffer from the Bandwagon effect- where the fans are only supportive during periods of success. What brought me to this epiphany was this: I have two tickets to the On Deck Series (I am pissed at the Phillies for making this a part of my season package, but more on that later) that I am trying to sell for face value. Zero takers. Now if this was 2008-2010, I can almost guarantee these seats would have been gone already. People are falling off.

So why don't I want to go? I do not want to go because I am not freezing my ass off in April for a game that doesn't matter. I'll freeze and bundle up for games that matter in April and October. Yes..yes...bundling up also means sneaking in a fifth of Jameson whiskey in my belly. Reminds me of when I was crossing through customs in Ireland and the official asked me if I had any alcohol. My reply was simple and true: "Yes, in my bloodstream".

The Phillies season ticket plans rotate the On Deck tickets between each of the four plans, but I still think it is bullshit. I want 17 games that matter. Every four years I get the 16 game plan and I think that policy sucks. Now the superstitious side of me kinda likes it. The last time I had the On Deck tickets was 2008. That was a pretty good year huh? Also the last time the Giants beat the Patriots in the Super Bowl, the Phillies won the World Series.

Well I digressed a bit there, but it was all background for the main gist of my premise. There are alot of broken ankles around the Delaware Valley this Spring. "Fans" jumping off the bandwagon, fatalism because the left side of our infield is out indefinitely, and wondering if Charlie can manage an ever changing lineup and play small ball. I hope the bandwagon fans jump off and just don't come back, it will make CBP a better place. It makes me think of those new Phillies Commercials:

Shotgunning Natty Ice in the Lot

Email ThisBlogThis!Share to TwitterShare to FacebookShare to Pinterest
Labels: Drunk Phils, Howard, Jameson, Must Be Spring, On Deck, philiies, Utley