Gear Up. Warm Up. Light Up. Drink Up. 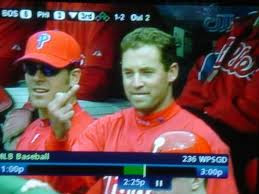 1. So, how long have you been writing Phillies commercials?
I started in 2003, the year before they moved to Citizens Bank Park.
2. Are we to deduce that all the sell-outs of recent years can be attributed to you?
Of course! Also, I invented the internet.
3.  Let’s get down to the nitty-gritty: you must have worked with a lot of the players and personalities over the years. Who don’t you like?
Aw man, you went there right away?  No warm up?
4.  Okay, we’ll start with warm & fuzzies then.  Who’s your favorite player to work with?
Well, Jimmy Rollins is probably the sweetest, and most fun to deal with.  But I have a soft spot in my heart for a lot of others, too, for various reasons.
5.  Like what reasons?  Like they smell good or they flirt with you?
Please, I’m like, their mother.  Or their bossy big sister, at least.  I have really enjoyed working with the ones who are funny, who have great comedic timing. Chase Utley is very funny.  So was Jamie Moyer.  Ryan Howard is witty --- he has lots of ideas. And my producer and I used to say that Mike Leiberthal and Randy Wolf should shoot a buddy comedy film.
6.  Like a road trip?
Very funny.
7.  Well, I heard you like funny.  Okay, so what players aren’t funny?
Pat Burrell was not funny.
8.  I thought all women loved Pat Burrell.
No comment.
9.  So, do you have locker room access?  Have you seen anyone naked?
I’ve seen Cole Hamels and Shane Victorino in their underwear. Probably others, too, I just can’t remember.  I’ve seen everyone without a shirt.
10.  Ah, yet you remember Cole & Shane?  Why?
Well, they’re both really nice.
11. Seriously?
Yes, why is that so hard for you to believe?
12.  You remember them half-naked because they are nice?
Yes!  I’m all about nice.
12.  Okay, well, that probably explains why your first campaign for Citizens Bank Park had the players skipping and rolling in the grass.
That was not easy, getting people like Brett Myers to skip and sniff flowers, let me tell you.
13.  Was that the hardest thing you’ve ever had to do for The Phillies?
No, that was probably editing footage of Aaron Rowand running into the wall and breaking his nose.  Over and over, back and forth, going to the music.  I almost threw up.  And then there was a commercial where I tried to convince Vukovich, rest his soul, to say a line about being “in touch with his feminine side.”
14.  Did you succeed?
No.
15.  One last question, Kelly.  Can you get me tickets?
No.
Thank you for nothing!

Here is the link to the new Phillies 2012 commercials, if you haven’t already seen them:  http://philadelphia.phillies.mlb.com/video/play.jsp?topic_id=26956682&c_id=phi
In addition to writing commercials, Kelly is a novelist with Simon & Schuster, so go buy for that book club we know you’ve been planning to start.
http://www.amazon.com/s/ref=nb_sb_noss?url=search-alias%3Daps&field-keywords=Kelly+Simmons+books
Or check out her blogs at http://www.kellyasimmons.blogspot.com  or http://www.verysincerely.com if you like girly things.
Posted by BL Chris at 2:43 PM