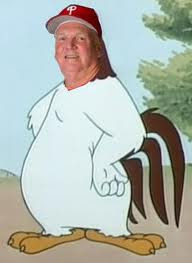 A terrible Phillies loss combined with a disgrace of a hockey game....pass the Jameson, HM!
One play sticks in my mind from last night's game that has really been bother me. With one out in the 11th inning and Carlos Ruiz on 3rd, Uncle Charlie opted to send out Thome to pinch hit. Everyone knew Thome was going to strike out. Everyone except for Uncle Charlie, who stuck with his good 'ol boy Thome. The right move was to pinch hit Polanco in that spot. Polanco is no longer a great hitter, but he puts the ball in play. That's pretty much all the Phillies needed in the spot.

Manuel has been known as a player's coach, but I think with this team, it is something that is backfiring on him. There is a reason the Twins and White Sox let Thome go...he is no longer good. Sending a guy up to pinch hit who has struck out six times in 12 ABs is poor managing. In comparison, Polanco has struck out 6 times in 29 ABs this season.

Manuel was blessed with a very talented team for most of his career here and with the Indians. Point to a time where he made a shrewd or smart move. I have watched 95% of the games during his tenure here and I cannot recall one. He is good when the players are good and he just lets them play. For this team right now, he needs to manage, and quite honestly he is horrible. He has had no practice at managing. For years he just wrote in the same lineup game after game and now when he needs to be strategic and bargain for runs, he has failed.

Lee was magnificent. It is disgusting to me that he did not get a win. 10 scoreless innings! This has not been done by a Phillie since Terry Mulholland on May 8, 1993, against St. Louis. Lee did not throw his 100th pitch until there were two outs in the 10th. That in itself is amazing. Cain was just as good however, but with this Phillies lineup, a mediocre pitcher can look like a Cy Young candidate. So the Phils move on to play the Padres, the only team that may be more anemic than the Phils right now.
Posted by BL Chris at 9:10 AM