To Joe Blanton: Made with Love and Bacon 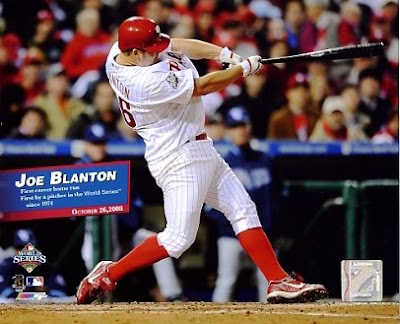 I used to just have a thing for a stocky fella in a nice stirrup sock. But ya know what?
The dude is a pitcher who hit a home run in the World Series. That’s an elite group and no one new had joined in over 30 years. He was the first Phillies pitcher to have ever done it. Just saying it warrants a little respect.
Now, I don’t wanna get all Robin Roberts on you guys… (as in the lovely host of Good Morning America/ former ESPN broadcaster who my dad says “really knows her shit for a female sports reporter” -- not the greatest Phils pitcher of all time)… BUT that is kind of a cool thing, yes?
He could have SUCKED for the rest of his career (maybe elsewhere woulda been cool) but Joe Blanton will always be alright in my book.
OF COURSE I am psyched for the Phils’ first series win of the season! We needed our friggin mojo back. But I might specifically be a lil bit happy for my man-- my broseph.
I just keep thinking back to last year. There he was on the cover of Sports Illustrated with Perfect Roy, Gosh Golly Roy, Pretty Cole, and Cool Cliff--- as the awkward afterthought. As if he photo-bombed the picture himself and we all knew it and were amused as hell.
So I have a little place in my heart for the husky guy in the background; always.
Though he’s not so husky anymore. In fact, does anyone else think he looks a bit gaunt? I kind of want to make him something with bacon.
Posted by MegsMcG at 11:16 PM