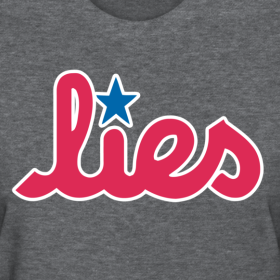 Dear Ruben,
Just be honest. All the lies, everyday.  I’m at the point that whatever you say, I’m going along with the opposite, since that tends to be the safe path. But worst of all is the LIES.  The Phillies’ fan-base may be loud, obnoxious and annoying, but they are not idiots.  We know when something is up.  Just be HONEST! The Phillies have been on a downward spiral since 2009, the same year you took the reins. It is obvious we need bullpen help, but to be honest with you, you overpay and overvalue people.

It all started with Howard, you overpaid him by about 10 million per year and you signed him two years late. You overpaid for Cliff Lee, twice. I have no faith that you won’t overpay for 6/7/8 innings bullpen guys. Your tight-lipped smug arrogance would be better received if you had GM rings to show for it. You don’t so be honest. You are such an egotistical person, that I fear you will not do the right thing right now with this Phillies team. The way I see it, you have two choices:  1. Stand Pat, wait for Howard to come back, keep trotting dreck out of the bullpen OR 2. Give up, be a seller and unload Shane/Polanco/Lee to replenish the farm and sign Cole Hamels.

Lee and Utley have gotten the Pat Burrell free pass in this town. Lee has had some real tough luck losses, but lately his fastball is up in the zone and down in speed and he is getting SHELLED. +5.00 ERA in his last 8 starts. Utley is a liar. He has done it twice to the Phils fans. How many times are we going to ‘play’ Charlie Brown while Lucy (Utley) pulls the ball away from us as we are about to kick it? You and Utley make a perfect match, both are smug liars.

Immediately designate Qualls for assignment. You depended on a 50+ year old Contreras to be your set-up guy. That was your first mistake. Your second was blowing your bullpen load of money on one guy, Papelbon. Granted he is good, but who will know if he never gets the ball with the lead. Don’t just stand there each night while you give Manuel the likes of: Rosenberg, that guy from Friends, the wrong Raul, etc to hold a lead or to keep it close. Do something different. Those guys flat out suck.

Finally, the bench you assembled is atrocious. 2008: Stairs, Jenkins, Taguchi, Coste, Dobbs, Bruntlett. 2012:  Fontenot, Luna, Kratz/Schneider, Mayberry/Wiggington. If the saying is correct that you are only as strong as your weakest link…then this iteration of the Phillies bench sucks. So does your decision-making skills. I guess you did not learn that at Penn Charter chief. Get a clue.