Assessing the Phillies at the All Star Break 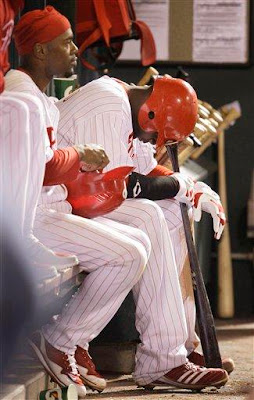 Frankly, right now, the Phillies are just not a good baseball team. Nearly every game I watch, no matter the score I get a feeling that they will lose. This has been really difficult to accept since the past couple of years, the attitude has been no matter the score they will find a way to win. Nearly every game, one aspect of the team looks good and another is awful. The pitching will be great but the offense can’t get a run and vice versa. Obviously the biggest issue this year has been the bullpen. They really have been terrible; blowing up nearly everything positive the offense has done this year. The offense has been surprisingly good, considering it was a weak spot last year, especially in the playoffs, and they have been able to do it without Howard and Utley. Doc and Cliff have not looked like themselves so far, however I get the feeling Doc will return from DL ready to dominate and Cliff will go on a run after getting his first W. The thing that is the most frustrating, in my opinion, is that I still see them as a great team. They have a great offense (on paper) and 3 of the best starting pitchers in the game, they should not be 13 games under .500 and 14 games out of first place. But that is where we stand at the All Star Break, and it seems like everyone is finally realizing how bad this season really has been. I think people got a little too used to seeing great baseball almost every night for the past 4 years and it will be hard to accept. As for the rest of the season, the thing that will be talked about most is what will happen with Cole Hamels. Personally I think we need to find a way to resign him. He’s a homegrown players, in his prime, who won us a World Series and he seems like he wants to continue to play here. Along with that, with Halladay and Lee pitching the way they have, he has been the one of the only bright spots in the rotation and on the team this season. As for the team, if something is not changed in the bullpen, it is going to be a long second half. The positives are that Utley and Howard are back, finally making the lineup look like what we’re used to and Doc should be back soon enough. However the question all of us are asking is, will it be too little too late?