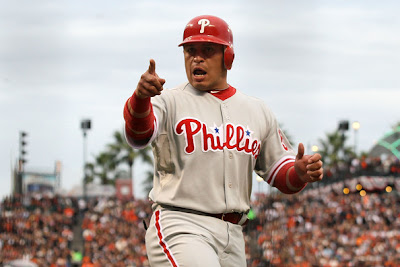 One of the most frustrating things about this 2012 Phillies season has been that Carlos Ruiz is having the season of his career and it is being over shadowed by how bad the first half of the season was for the rest of the team. Chooch got his first All-Star bid this season, and he was more than deserving of it (even though in my opinion he should have started), being nearly the only bright spot so far in the 2012 campaign.

So far this season, Chooch’s offensive numbers are better than any other season he has had in the big leagues in nearly every single category. In comparison to other starting catchers in the MLB (as of 7/16), he is first in AVG, and SLG, tied for first in RBI, second in hits and OBP and third in HR. He is also tied for second in AVG for any player in the bigs. He is currently on pace to have one of, if not the best season by a Phillies catcher ever. And right now, he shows no signs of slowing down.

Not only is Chooch propelling himself to new statistical highs, but he is really stepping up as a leader during a season when this team needs one, badly. My dad always tells me that the catcher has to be the leader on the field because he is the only one looking out at the rest of the players, and they are looking at him for leadership. You can just see in the way he carries himself in the past couple of years, but especially this year, he is one of the most important leaders on the team.

The love affair between the fans and Ruiz has it an all time high this season. Chooch has always been one of the most popular players off the field, but his play this year really catapulted him to a new level of celebrity in the city. Not only is he the best player on the team right now, but there is no doubt in my mind that he is the most popular in the eyes of the fans as well. You can tell the fans get the most excited during games to scream “CHOOOOOOOOCH” any chance they get. Even in Colorado over the weekend you could hear through the TV the cheers from the traveling fans for the catcher. Carlos has really established himself on and off the field this season, and I couldn’t be happier for him. I only hope he can keep this going for as long as possible and maybe rub some of it off on the rest of team during the second half of the season and see some positive strides from them toward the end of the year.