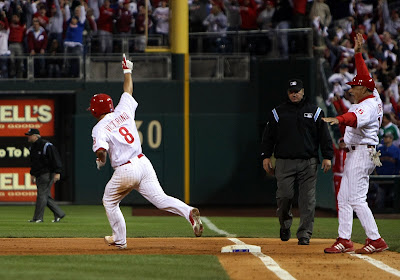 When I first heard the rumors of Victorino being traded I didn’t really feel anything, I knew the Phils would be sellers at the deadline and Victorino would most likely be involved in a trade. As soon as the trade became official I realized how much I was going to miss the Flying Hawaiian.  His performance hasn’t been as exciting as it was during the magical playoff run in ’08, but he stayed one of my favorite players throughout the years, even if I didn’t realize it.

2008 put Shane on the map. He was a one of the biggest keys in the Phillies winning it all that year. From the grandslam off CC, to his game-tying homer in LA during the NLCS, he hustled his way into the hearts of the fans. I was at game 2 of the NLDS when Brett Myers’ walk set up the Victo grand slam and to this day I have never been in a louder stadium. Not only was the grand slam a huge turning point in the game and the series but that was the first time I really believed the Phils could make a run at the WS that year.

The NLCS that year was also a turning point in his career. Starting with his encounter with Dodger’s pitcher Hiroki Kuroda, when Kuroda threw a ball at Victorino’s head and the two exchanged words. Victorino really showed the kind of tough player he was when he showed Kuroda to go for his ribs but not his head. And even though Game 4 of NLCS that year will be remembered for Matt Stairs’ winning home run, that would not have happened without Victorino’s game tying home run three batters earlier.

Even though the years after 08 were not as memorable statistically for Shane, he remained a fan favorite. Shane always hustled on the field, always had a smile on his face and was one of the most loved guys by the players and the media. The past 5 years were arguably the best in franchise history, and Shane was here for it all and had a part in most of the memories. Even though in my opinion the trade probably had to be done, it’s hard to say goodbye to a great guy and a great ball player, not to mention weird to see him in blue. Thanks for the memories Shane and best of luck in LA.