Only History Will Tell 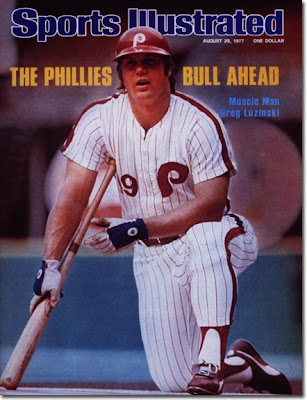 Growing up in Philadelphia in the 1970’s and 1980’s allowed me the opportunity to experience the talents of many legendary sports figures. Of course, as a lifelong fan of the city’s professional sports teams, I have been provided the thrill of victory and the agony of defeat (thank you ABC’s Wide World of Sports, for the phrase) on many occasions.  As expected, I have spent much time wallowing in heartbreak and letdowns in Philadelphia sports. I have also been afforded the golden opportunity to swim laps in the pool of victorious ceremony. It is a combination of both of these that apply, as I sit back and reminisce about the Philadelphia Phillies of the last 35 years.
At 39 years of age, I am a tad too young to remember much about the Phillies’ 1976-1978 National League Eastern Division teams that steamrolled through the Major League’s senior circuit, winning over 100 games twice, only to lose to the Reds and Dodgers in the Pennant Series. What I do know comes from what I have read, viewed and been told through the years by many who were there to experience what could only be summed up as bitter defeat. While I don’t remember many of the players on those teams, I do know they captured the hearts of a city, those years bookending the celebration of our great nation’s bi-centennial. Their failure to “win it all” in then has not diminished the capacity to which they are held in the memories of those fans who lived through it. My own fondest recollections start a short while after.
After a season of mediocrity in 1979 (and over most of the 97 years prior, truth be told), the Phillies finally found glory in 1980. I was a little older, and can remember watching on television the final out and Tug McGraw’s victory leap with outstretched arms after making Willie Wilson look just a little foolish with his patented screwball. The newly crowned World Series Champions were permanently etched into my memory.  Even 32 years later, I can remember the names of what I personally believe to be the greatest starting nine (and closer) ever assembled, and the nicknames some of them so proudly beheld: The Bull; Charlie Hustle; Shake ‘n Bake; The Minister of Defense; Schmidty and Tugger. Larry Bowa, Bob Boone and Manny Trio rounded out this tremendous group. This was truly a classic team, which centered around a time in my life where everything seemed larger than life.
While I didn’t have to wait much longer to witness another shot at glory, the feeling was quickly dissipated at the hands of the Orioles in 1983, despite the Phillies fielding a veritable team of future Hall of Famers: Pete Rose, Joe Morgan, Mike Schmidt, Steve Carlton and Tony Perez. This was to be the last hope for what seemed to be an eternity.
For ten years, the city’s professional baseball team, and my spirits, went dark, forced to sit through an endless stream of virtual nothingness. As I progressed into the life of a puddin-headed, acne enshrouded teenager, the Phillies skidded into mediocrity. 1984 through 1992 were about the darkest baseball years my memory can recall. As a result, only two events bring any sense of pride to my psyche: The bittersweet ends of the line for Mike Schmidt and Steve Carlton. Much of the rest, sadly, I’d rather keep deep in the recesses of my rocky cranial cavity. Despite this slip into sports abyss, Philadelphia would once again find itself alight with excitement.
The 1993 season brought a sense of swagger to this professional sports beleaguered town. The emergence of “Macho Row” on the scene re-captured the bright attention and spirit from 1980 that I had thought was lost for good. The city was hungry, and this band of wiry outlaws were set to provide the feast, a buffet including many of the elite teams in the National League. While they didn’t win the World Series that year (thanks, “Mitchie-poo”), many of the names of that gruff crew will not be forgotten. Heck, even some of their nicknames were rough and tumble, like the greasers in the street gangs of the 1950’s: Nails, Dutch, Inky, Head, Wild Thing, etc. What is funny enough, though, is that the entrance into my legal drinking years (1994 to be exact) started in the same fashion as the entrance into my teen years: with an extended streak of Philadelphia baseball sucktitude. Talk about curses.
Since I am writing about the memory of a kid growing up in the city, reflected now as he hits middle age, it wouldn’t be fair for me to elaborate on the last number of years as it relates to being excited for the season and to be able to watch certain players grind it out on the diamond all summer long. That will be up to someone else to find their own memories to share. My adult self is all too aware of other, more important things in life to be concerned about much more than general statistics (if even that), as opposed to that starry-eyed kid of yesteryear tracking my favorite players like a throng of teens drooling over the latest singing sensation. Each kid from every generation has their unique memory of Philadelphia Phillies Baseball, and their own story to tell you.  For the kids of today, how will they remember the Phillies of 2007 through this current slide?  Only history will tell.

Cheers to another 40 years!
Russell Hackett
@sliceofhack
Posted by BL Chris at 8:50 AM