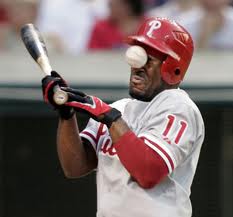 So, a week or so ago, I started with this line of thinking:  There has to be a reason, perhaps many, to like this year's team.  Those are...  Then, as I said to the train, I'm stumped.  Try as a fan may, finding a reason to stay involved with this ball club proves beyond daunting.  The following is what I came up with, way back last week.  Some of the items have since changed...

1.)  The J.P.s: Jonathan Papelbon ad Juan Pierre.
About ten days ago, Pap had just one blown save and was the lone bright light in an otherwise dark and dismal bullpen.  However, the debacle against the Mets over the past weekend has left a vile taste in the mouths of the phaithful.  The silver lining?  Pap competes.  Unless Charlie decides to get him work in a non-save spot, #58 maintains a killer instinct we haven't seen in the 'pen since Lidge in '08.  I appreciate a guy who's this intense.
Despite platooning in left with failed-experiment John Mayberry, Jr., Juan Pierre plays like a true professional.  He delivers whenever called upon, defying his 34-year-old body.  His 74 hits in 74 games played trumps Mayberry's 48 in 78.  It doesn't take a genius--hell, it doesn't take bumpkin-level smarts to call that shot.  Oh, and his 20 steals and 33 runs are each one better than starting CF Shane Victorino (more on him later...).  I'd like to see JPBeastMode (his twitter handle!lol) bat leadoff and set the table for Utley, Howard, Pence, and...

2.)  Chooch.  He should be listed first, but I'm trying to stay true to what I wrote originally.  His .350 batting average places fourth in the majors at the All Star break.  Speaking of, Ruiz will be playing in his first mid-summer classic tomorrow night in Kansas City.  Chooch handles the pitching staff like no one in recent Phillies memory.  I'm sure people wait expectantly for the impending dropoff; I'm just not so sure it's coming.  Chooch seems locked in.  I can root for that all season.

3.)  Halladay.  When healthy, Doc performs.  Simple as that.  A perfect game and a playoff no-hitter in 2010 and a second-place finish in Cy Young voting in 2011 show just what Halladay has done in a Phillies uni.  I suspect than he will return to form once he returns to the field.  At very least, we'll get to see a true gladiator take the mound every fifth day.  When he returns.

4.)   Speaking of returns, Chase Utley and Ryan Howard are back.  Utley crushed a home run in his first AB of the year.  Howard, well, he has some work to do.  If anything, these two can bring back fond memories of the team that dominated the NL East for the past five years.  That may be enough to salvage some dignity and motivate the rest of the squad.  Because, let's face it, most of these guys played elsewhere when the Phils were "elite."  6 and 26 have been elite players; should they regain some of their former swagger, things could get better.

5.)  The simplest reason of all?  It's baseball.  The same game I loved as a boy.  Pure sport.  As a fan of the game first, I am forced to watch with an eye on the strategy, the chess match, the individual battles that take place each and every pitch.  Of course, I have more fun when the Phils win those battles.  But someone wins, all the time.  There are no ties in baseball.  Steroids, PED's, pine tar, Vaseline, emery boards, bullpen cameras--all just attempts to get an edge.  The guys on the field still have to make it work.  That's enough for me; I'll watch and enjoy the sport.

Now for the negative:

1.)  The first thing I wrote after all that pollyanna shit?  "Rollins and Victorino."  And that was before Jimmy went 1-the series this weekend versus the Bravos and fouled out three times in one game.  Fouled out three times in one game.  Hey Jimmy.  How 'bout dropping down a bunt and hustling down the line?  Just for shits and giggles.  Just to mix it up.  Just a thought.
It was also before Victorino bitched up about batting 7th or 8th and got scratched.  Good for Charlie for making a statement.  But honestly, it was neither bold nor timely.  Victorino has been dogging it all year.  Now he's the subject of trade talk.  Trade talk?  Who the hell wants an underachieving malcontent?  Not me...
Eight days ago, what I wrote was:

.    They will pop out at least twice a game.  Each.  It’s aggravating to watch Vic drop the bat head and catch the underside of the ball, skying it somewhere in the infield.  Usually with men on base.  Jimmy pops out, and when he hits a grounder to short, he lollygags his way down the line, removing his helmet and batting gloves before he touches the bag.  At least when 8 grounds out, he will bust it down the line.  I tell the 6-9 year-old kids I coach to run everything out.  Errors are a part of the game, Jimmy.
Ugh.

2.)   Charlie Manuel seems unable to “manage” his players.  Sure I love the fact that he and Rollins are shown in the dugout having lively discussions about hitting every game.  But does he get in J-Roll’s ass for the above-mentioned infractions?  Also, Charlie plays small ball at all the wrong times.  And doesn’t when it makes perfect sense.  I know injuries have killed the pitching staff this season, but the way the skipper handles his staff is nothing short of mind-boggling.  Raul Valdez got a start the other day…  Need I say more?
That was the other day.  Charlie hasn't inspired much faith since then, with the mild exception of Shane's benching.

I could go on, but I won't.  It's depressing to think about.  In order to end on a positive, I will tell you my primary reason for liking the 2012 Phillies.  Hint?  It has nothing to do with what takes place on the field.
From April through June, I helped coach a teeball team to an undefeated championship.  The team's name?  The East Falls Phillies.  The kids were a true joy to coach, they followed instruction, and had each others' backs all along.  Now, East Falls is a diverse, mostly-blue-collar neighborhood in Philly.  Many of the kids reflect that fact.  I'm not too sure how often they get to go to Citizens Bank Park.  At the suggestion of a friend, whose nieces played for our team, I placed a call.
The Phillies provided a set of tickets for our team.  The kids and coaches, plus a parent per kid, will be in attendance later this month when the Phillies play a home game.  That's pretty cool, right?  The day they received their trophies and recognition for their rare season, the kids also learned that they will be going to the Bank!

So as you can see, despite the predominantly lackluster performance from our favorite team, reasons remain to like the 2012 Phillies.

Your comments are welcome...