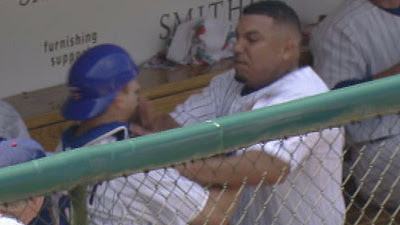 On Wednesday, the Phillies shortstop failed to run out a groundball. It wasn’t the first time he had done this. I have let more than 24 hours pass because I wanted to be able to write an impassioned, yet vulgarity free article. I will try to accurately describe the feelings from both sides in the next few paragraphs, so here it goes…

Why it is no big deal
The baseball season is long and arduous.  162 games of travel, heat, and pressure. The ballplayer did not run out one ball from one groundout of over 600 plate appearances. How many times have you gone to work and “mailed it in”. You were there in person, but not in spirit? What is there to play for when your team and more specifically your bullpen is crap. On a side note, I would check Lindblom’s DNA, because I am going to bet that is Geoff Geary or Qualls in Josh’s uniform. It was a singular instance that is bound to happen to everyone. The player does more good than bad and should be afforded a break now and then.

Why it is a big deal
Not running out the ball and hustling is a disrespect for the game, your manager, teammates, and the fans. I am not saying you have to be Charlie Hustle on every play, but like it or not, you are the role model and your actions spoke volumes. It was one singular instance, but when you make 12 million a year for that one at bat, he was paid roughly $20000.00.

The other issue I have here is with Manuel and his other Phillies teammates. As soon as he dogged it to first, you pull him. Then you sit him for a few games after that. Talking doesn’t work for this guy. He apparently has a sense of entitlement and who can blame him, the Phils ponied up 12 million a year for his services. Manuel is a lame duck manager that handled this situation with the same grace he used to handle the double switch. He botched it completely. In 5 years Dom Brown may dog it and look back and think, “I played on a team where the superstar shortstop dogged it. I should be able to ease off the throttle now and then too.” If the shortstop had done the right thing, maybe Brown would never dog it and look back to the SS’s hustle as a reason why he always would. I watched the game and I will tell you what…if I was the pitcher that day when he half-assed it down to first, I would have went Carlos Zambrano on him. In his face as he walked (slowly) back to the dugout. Yet no one did anything. Utley, Howard, Lee, Halladay…*crickets*

On second thought, maybe he was so surprised that his didn’t pop up, that it took him by surprise. I never thought of that until now.

* I specifically decided to not use his name in this article.