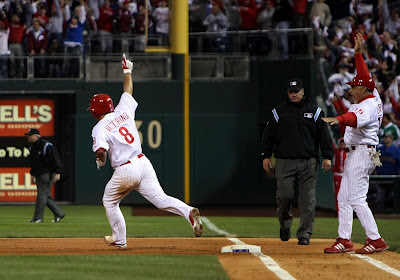 It is October and this year it is not Phillies red. I have gone through all 12 steps I think: Denial, Anger, Depression, etc. Right now I am just sad. I should be checking the calendar, arranging my schedule around the playoff games. For many reasons it was just not meant to be, the why is for another time or article. What I want to do is write about and collect fan stories of their favorite playoff moment from 2008-2011. I want to know the details: where you were, who you were with, what cologne/perfume you were wearing…I will start it off with one of my stories:

It was October 2nd, 2008.  It was 62 degree and cloudy when I arrived in Lot F2 near the now demolished Spectrum. Tailgating is all part of the experience for me and Jameson is a vital part. I had attended both home playoff games in 2007, where the Phillies were never really in either game, so while hopeful, I was skeptical because of the past years disappointment. On the menu were Denny Dogs, which are hot sausage wrapped in a ¼ inch thick slice of Virginia ham. This is placed on a roll with a slice of cheese and is AWESOME. The beer of choice is always Miller High Life. It is more of a tradition and superstition rather than it being my favorite beer. This is where things began to go wrong…and by wrong I mean terribly fun. There were about 50 or so people at the tailgate and when you get locked into a High Life and Jameson boozefest, it is tough to stop. A half an hour before game time and we were all packed up and ready to head into the game. I don’t like missing the National Anthem, it is bad luck and disrespectful.

I normally sit in the 200 section right next to the big shot Hall of Fame boxes, but today’s seats were in 318. As me and my seatmate were going up the escalator, I happened to see good family friends going down the opposite escalator. The looks on their faces were part horrified and part laughing their asses off. What was the issue? I immediately went into the bathroom at the top of the escalator and looked in the mirror. Now I know what it was. I looked like a goddamn drunk. What I said to them, I do not know, but… Jameson mixed with Black Haus and Miller High Life makes you behave like the village drunkard in some early Irish novel ... total loss of all basic motor skills: blurred vision, no balance, numb tongue---severance of all connection between the body and the brain. Which is interesting, because the brain continues to function more or less normally ... You can actually watch yourself behaving in this terrible way, but you cant control it. A total body drug. The mind recoils horror, unable to communicate with the spinal column.

You approach the turnstiles leading into the game and you know that when you get there, you have to give the man your ticket or he wont let you in. But when you get there everything goes wrong: you misjudge the distance to the turnstile and slam against it, bounce off and grab hold of an old woman to keep from falling, some angry Rotarian shoves you and you think: Whats happening here? Whats going on? Then you hear yourself mumbling: "Dogs fucked the pope, no fault of mine. Watch out!... Why money? My name is Brinks; I was born... born? Get sheep over side... woman and children to armored car... orders from captain Zeep. Jameson is the perfect drink for baseball. In this town they love a drunk. Fresh meat. So they put us through the turnstiles and turned us loose inside.

Fast forward to the second inning and the real meaning of my story. Brett Myers at bat after being down to a 1-2 count was maybe the single greatest at bat by a pitcher in modern playoff history. He fought back and drew a walk from Sabathia, but he had to foul off close to 10 pitches and rattled that fat asshole CC so much that a few batters later Victorino hit the first Grand Slam in Phillies playoff history. I know it was early in the game, but that at bat by Myers and Shane were the tipping point for me. The glass was half full. The spectre of 2007’s letdown was forgotten. The Phillies could do this. While I cherish every game I was able to actually attend, this game stood out for me. That special place and time that I was a part of. While it was no Haight and Ashbury in 1969, I was there and felt that energy that still gives me goosebumps to this day.
Posted by BL Chris at 10:42 AM