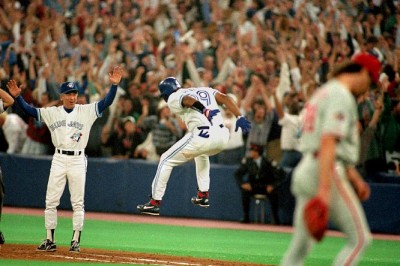 11:37 pm on October 23rd, 1993 is a date and time I will never forget. It took me years to be able to watch that highlight. Seeing it live on TV once was enough for me. Not until the Phillies won the World Series again in 2008 was I able to watch that heinous villain Joe Carter round the bases. It took Mitch only 4 batters to blow a 2 run lead and send me into one of my most colossal nights of debauchery ever. Maybe Mason, Anderson, or West should have been in the game at that point. I truly don’t second guess Fregosi’s move there. Mitch was the Phillies closer. Period. I plan to recreate, to the best of my recollection that night from 11:37 pm on. I will try to make it the most accurate and least factual account possible.

The night all started well enough. I know this much. I was in the Juniata section of Philadelphia on Glendale Street. The 4300 block to be more precise. There was copious amounts of beer, wine, broads, and hope. There were two bottles of crappy champagne in the refrigerator with dreams of being able to pop those bottles after  Game 7 victory. As we all know, that never happened. Those bottles turned out to be the proverbial first shot fired. I will fast forward to the pitch that crushed a city.  With two runners on and the possibility of a game-winning homer on my mind, I stood right in front of the TV. I didn’t think the pitch was in a bad location. When it left the bat, I also didn’t think it was high enough to go out of the park. My intuition may have been a bit off due to Kamikazes and false hope. I truly had the hit pegged as a double and a tie game with a man on second and one out. That wasn’t the case and as my fellow attendees on Glendale Street will attest, I didn’t yell or scream or jump up and down like they did. I was just sad, so I went to the refrigerator and took out the two bottles of champagne. We wouldn’t be using them for victory any longer.

I walked directly outside and popped the one bottle and guzzled it down. I then proceeded to urinate in the neighbors birdbath. My friend Rich came out and popped the other bottle and in true macho fashion, he guzzled the other bottle. Now I don’t condone what I just did or what I am about to tell you I did, but it happened. A fellow Juniata resident that I did not know at the time in 1993 had heard about this story. I was just an angry young man, I had no idea my tirade would be legendary. One of the broads came out, my girlfriend at the time who lived two doors away, and started chirping at me and Rich to get in the house. I saw her mouth moving, but simply didn’t listen. I probably told her to go back in and do laundry.

Rich and I were now fully alcohol fueled and made a bad choice next… in a night filled with bad choices, this may have been the most egregious. We broke the bottles while throwing them at a Catholic School, Holy Innocents. It was right on the corner from the house where I was and quite honestly it felt really good at the time. Alcohol+Ego+Macho+Anger equaled us now going over to the Karl Mackley apartments and screaming for anyone who liked the Blue Jays or looked like Joe Carter to come on out and be dealt with. Thank goodness for us and them, no one came out… and no one called the police. A quick saunter down to the corner of K Street and Cayuga, right by the golf course, had us stumble upon a Septa stop sign pole. Rich and I shared the same brain that night and moved the post back and forth until we got it out of the ground. In a move never tried before, we did the dual javelin throw of said sign post into the broad side of a passing Septa bus. The night was not yet over…

Our next target was the stop sign at the corner of Glendale. We wriggled it out of the ground, but it had a huge block of cement as an anchor, so a javelin throw was not possible. We simply left the stop sign in the middle of the street. At around this time, a pick-up truck was passing by with two dudes in it. They drove slow past us and saw that we had Phillies gear on too, so… They asked us if we wanted to go find Mitch Williams house in Jersey and bust it up. In our smartest move of the night, we politely declined, but gave our best wishes. We then returned to the house and drowned our sorrows a bit more. People asked what we did, but anything we said can and would have been used against us, so we just smirked.

The next morning I wake up two doors away and the girlfriend’s Dad says to me, “ Some assholes ripped out a stop sign and a Septa sign last night. They left the sign in the middle of the street…”. Ouch. Either he knew it was me and was going to see if I was a man about it or he knew and was just going to be pissed at me either way. I calculated the possibilities very quickly and said, “Hey Mr. O’Brien, I was the asshole”. I saw him smile and shake his head and say, “ I figured it was you and your crew. Let’s go clean it up and move the stop sign out of the street. I know how much you love the Phillies and that loss must have been hard to handle huh?”. You are goddamned right it was hard to handle Mr. O’Brien. I went to Toronto in 1995 with a group of my college baseball friends and as we went in a club called The Joker, there was a wax Joe Carter in full uniform standing there. I went over and blew my nose on his uniform. I have a picture to prove it, which was taken right before I was thrown out for blowing my nose on Carter’s uni. It took me 15 years to be able to watch it again, but truth be told, I am still not over it.
Posted by BL Chris at 8:48 AM