Bobby Abreu and the 2005 Gold Glove 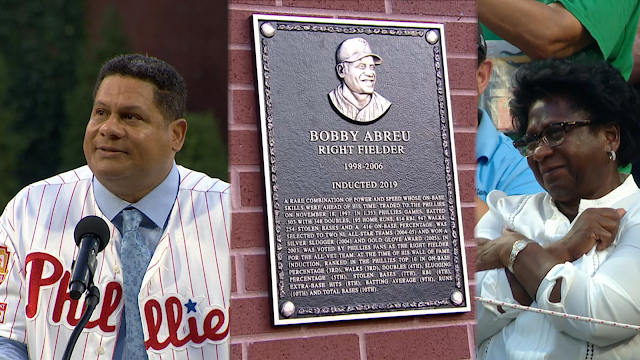 Bobby Abreu somehow won the Gold Glove in 2005. I still wonder how something like this happened. I took a deeper look at his 2005 season, focusing on the fielding statistics that were available as well as things that I saw about his defensive play in the outfield. There was never a doubt about Bobby's offensive numbers, however, I contend that Abreu was not a clutch hitter. If the Phils were losing 5-1, Abreu would be your guy. When they needed a clutch hit in the 9th with the game tied 3-3, Abreu came up small.

Firstly, his Defensive WAR (dWAR) for 2005 was -1.5 and his lifetime average dWAR is -1.0. Defensive WAR is a measure of wins above replacement, but given only the defensive stats of the player and their position adjustment. To put this in perspective, Pat Burrell's 2005 dWAR was 0.0. In layman's terms, that means that Pat the Bat was BETTER defensively than Abreu.

People often point to Abreu's strong arm as the possible reason why he may have won the Gold Glove. In 2005, Jason Michaels who played about 50% of the games that Abreu did had 10 outfield assists compared to Bobby's 7. Of note, Burrell also had 10 OF assists. Pundits will say that people did not run as much on Abreu because his arm was so strong, so that could be a reason why the above players had more assists.

My personal observation on Abreu's RF defensive play was that he constantly took bad routes, avoided leaving his feet for a catch, and we all know that his fear of the wall was well documented. His offensive stats in 2005 were really good, but that was really never in question. in 2005 he has 102 RBIs, 31 SB, 24 HRs, 37 2Bs and hit for a .286 BA. Those are offensive juggernaut numbers, well documented by his 4.4 offensive WAR and 60.2 lifetime oWAR.

Bobby Abreu won the Gold Glove because of 2 things: his offensive numbers and the attention he received from the HR Derby at the 2005 All-Star Game. It is a travesty to Gold Gloves that Abreu received one. When someone so undeserving gets a Gold Glove, it lessens the value of the award.