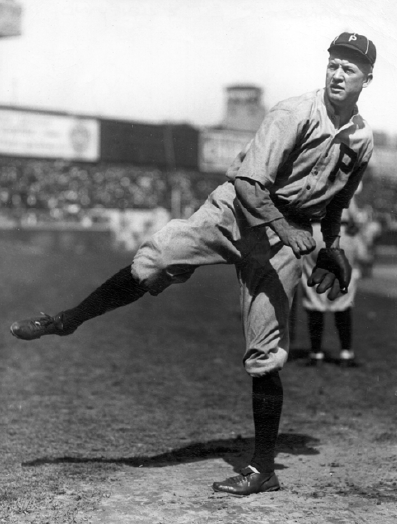 Grover Cleveland Alexander was named after the 22nd and 24th President of the United States. He played for the Phillies from 1911-1917 and then returned for a few games in 1930. His record while a Phillie was 190-91, 2.18 ERA and a WHIP of 1.075. Pete always wore a uniform that was extra baggy and the cap on his head was undersized and pulled down cock-eyed over one year. He won 31, 33, and 30 games in a three-year span, which included the Phillies first trip to the World Series in 1915. After the 1917 season, he was sold to the Cubs because Phillies owner William Baker said, "he needed the money".

Before Pete joined the Cubs, two major things happened that would change his life forever. He married Amy Marie Arrants and he was drafted into the US Army and he spent most of 1918 as a sergeant with the 342nd Artillery fighting in France. The war took an incredible toll on Alexander as he was exposed to mustard gas, had a bomb explode near him that caused partial hearing loss and part of his ear.

"Ole Pete" had a love for the liquor for quite some time prior to his being drafted into the US Army. When he came back from the war, the drinking problem escalated, he was afflicted with epilepsy, which not much was known about the disease at the time, so he was perceived as having drunken episodes during a seizure.

From 1918-1925, Pete played for the Chicago Cubs, where he was 128-83 with a 2.84 ERA over his career there. His predilection for the drink consumed him. The Cubs even hired a bodyguard for Pete, whose sole duty was to stop Pete from drinking. His wife Amy also traveled with him, to keep his habit under somewhat of control. Neither option really worked and in the middle of the 1926 season, the Cubs Manager Joe McCarthy had enough of Pete and his antics and sold him to the St. Louis Cardinals.

Alexander played with the Cardinals from 1926-1929, where he would play in 2 World Series, winning one of them. The story of the ending of the 1926 World Series is maybe Pete's most famous. Pete had complete-game victories in Games 2 and 6. It is purported that Pete went on an EPIC bender after his Game 6 win, because he knew he would not be pitching again in that series. With St. Louis ahead 3-2 in the bottom of the 7th, with the bases loaded and 2 men out against the Yankees, Alexander was summoned in to pitch. Pete was suspected to still have been drunk when he entered the game. He was definitely sleeping in the bullpen for the better part of the 7th game of the World Series.

The first batter Alexander faced was the feared Tony Lazzeri, who had 117 RBIs that season. Ole' Pete nearly gave up a grand slam on a very close foul ball, only to strike Lazzeri out to end the inning. He coasted through the 8th and first two batters of the ninth with the Cards still ahead 3-2 and Babe Ruth coming to the plate. Pete said after the game. "I walked Ruth, because there was no way I was going to let that fat bastard hit a Home Run and tie the game". Ruth inexplicably tried to steal 2nd and was caught to end the game and the series to give the Cards the 1926 title.

His wife divorced him twice, once in 1929 and again in 1941. The final decades of Pete's life were tumultuous, to say the least. He was in and out of sanitoriums, worked various odd jobs such as a flea circus, bartender, and hotel help. It got so bad and he was seen as such an embarrassment to baseball and the National League, that Commissioner Kenesaw Mountain Landis, NL President Frick and Cardinals President Sam Breadon agreed to give Alexander a pension of $50 a month. Alex was not allowed to actually have the money, but it was sent to his "handlers" to pay for food and lodging for Ole Pete. They feared he would just drink the money, which he definitely would have.

Alexander was able to gather himself for a short while when he was inducted into the Baseball Hall of Fame in 1938. When asked how it felt to be inducted, Pete said, "I’m in the Hall of Fame, . . . and I’m proud to be there, but I can’t eat the Hall of Fame.” Even the highest honor in the sport could not get him out of the doldrums where he continued to spiral for the next 12 years. He developed skin Cancer on his ear and had to have it amputated. For the better part of his last years, he was begging for change on the street to get enough money for alcohol.

Alexander's last public appearance was at Yankee Stadium in 1950 against the Phillies. Pete died mercifully on November 4, 1950, in a hotel room in St.Paul. The official cause of death was listed as Cardiac Arrest, but it is believed either an epileptic seizure or drunken fall in his room were the true cause. Years of hard living and abuse of alcohol were ultimately his true demise.

Pete was buried with full military honors and laid to rest in his family plot in Elmwood Cemetery close to St. Paul. Alexander still holds the National League career shutout record with 90, had 373( 3rd most wins on MLB history) wins and a lifetime ERA of 2.56. He allowed only 951 Walks in 5190 Innings Pitched. In baseball, Alexander was a believer that less was more. He often said, "What's the use of doing in three pitches what you can do in one?" Pete was not a fan of the strikeout but felt if he could put the ball where he wanted and the batter didn't he could induce outs on fewer pitches. Sportswriter Grantland Rice said of Pete, "He could pitch into a tin can. His control was always remarkable - the finest I have ever seen.".  Yet Pete was never able to control the bottle and he died broke and alone. 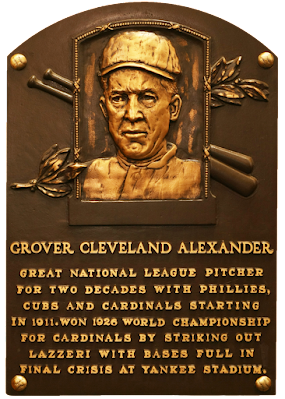