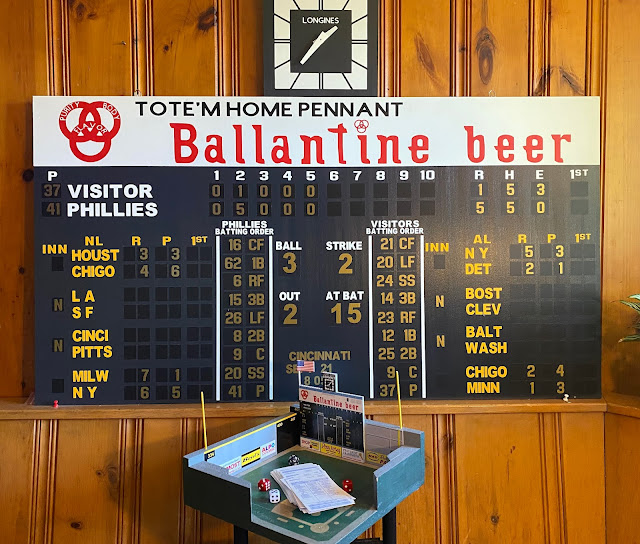 I have always been a baseball fanatic. For Christmas in 1982, I asked for a subscription to Baseball Digest. It was a monthly baseball magazine, but it was the size of the old TV Guides. There would always be these weird ads and coupons for some baseball gear, but I was intrigued by the one by Strat-O-Matic (SoM). SoM is a card and dice-based game that can be played alone or with a group of friends. Think Dungeons & Dragons for the baseball nerd.

Every cent that I had saved was dedicated to clipping the SoM ad and sending off for my own set. When I realized I did not have enough money, I set up a "stand" to sell some baseball cards on the corner of Summerdale and Langdon Streets near my house. I eventually started selling Kool-Aid as well, since I was of the entrepreneurial spirit and realized that I could get more money with the drinks and people perused the cards longer when they had a refreshment. It was more of a pop-up shop because as soon as I had enough money for SoM I closed up shop and sent off my money. It is funny to think of it now that I actually sent exact change via the mail!

The day my SoM came in, I first read the rule book cover to cover before rolling a single die. I know that isn't normal but I need to know everything about what to do before I do it. From the first roll of the die, it was an INSTANT love affair. The game came with the full set of 1982 cards plus a few bonus teams (1927 Yankees and 1955 Dodgers). I would memorize names and stats, mix and match teams from different eras to play each other (the '27 Yanks usually thumped the '82 Phils, even with Lefty on the mound).

When I tell you that I took and played SoM everywhere, I really mean it. School, vacation, parties, etc. All I needed were 3 die, a set of SoM cards, a notebook, a pencil, 1-20 chance cards, and my imagination. I loved creating my own scorecard and then aggregating the stats by hand. Using pencil and paper to do long division to figure out the ERA or Batting Average of the players. I became somewhat of a math whiz because I eventually could do some of those calculations in my head at the tender age of 8 or so.

Eventually, life got in the way and SoM took a backseat to being a college student, then a father, then a graduate student, etc. However, in March of 2020, due to the pandemic and lockdown, I fell in love all over again with SoM as an adult. Only now, I had adult money to buy different sets of cards, dice stadiums (Connie Mack replica scoreboard and stadium pictured above), and my love for the game grew even stronger. I was able to play dream match-ups with the '80 Phillies versus the '08 Phillies and settle who was best. I then played the entire 1964 Phillies season to see if I could erase the collapse. I "traded" for Robin Roberts on the 1964 team, but kept the entire rest of the team intact, including the actual starting lineup for each game. The '64 Phillies won the NL by 4 games under my watch. The Phils went on to beat the White Sox in the 1964 Series in 6 games.

In May of 2020 I purchased the SoM computer game. It is the same "engine" and logic that the card game uses, but the computer aggregates the stats for you. I was in heaven with that too. The PC game lacks almost all bells and whistles of graphics and UI experience, but it can allow you to play a game in about 20 minutes. The Cards and Dice game usually takes 40-60 minutes to play on average.

I also virtually some really awesome people, Don P. and Victor C., along the way that shared in my passion for baseball and SoM. So even when the Phillies continue to disappoint and Fall fades into Winter, I keep my baseball passion and math skills sharp with Strat-O-Matic til Spring.