DPF Fable: The Frog and the Scorpion 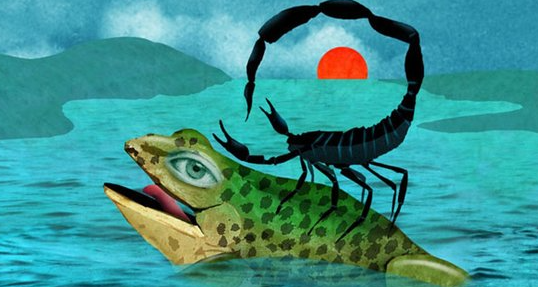 You may be asking why I am writing about a fable on a baseball page. The reason is this: We, as Phillies fans, are the frog. The scorpion has taken many forms, however. The bullpen, the GM, the farm system, Slapnuts, Starting Pitching to name a few. The other side of the river is a World Series Championship. Each year we allow the Phillies to climb aboard and we often get stung, by Memorial Day, 4th of July, etc. The die-hard fans are the frog in this case. We know by experience exactly what the Phillies will likely do year after year. For half of my life, the Phillies have been a below .500 team. Yet each February I have visions and hopes of October.

There is a different perspective to take on all of this as well. At least we are not Pirates or Orioles fans, because those teams stink. Thankfully, we are not Yankees or Mets fans, because they are generally deplorable humans. Every so often the gods of baseball shine down on us and kiss the frog, which has happened twice in my lifetime. Hope is a dangerous thing to have. It is also a crushing thing not to have. Even Orioles fans have hope. Their hope is that they do not lose 100 games, but it is still hope.

The scorpion this year may even be different. It is the owners and players themselves that are on their way to sabotaging a possible proper season. There is still hope, but as each day goes by, there is less of it. Too often, the recent hope of Phillies teams has been to be over 500 or to make the playoffs. This is a loser mentality. There is no grey area. The Phillies are either crowned World Champs of Baseball or I am disappointed. That's not to say that the entire season would be a disappointment. I want to feel the way I did in 1980 and 2008. I want to avoid how I felt in 83, 93, 09. I really want to avoid how I felt all of the other years between 1975 and 2021.