"I'd sit alone and watch your light

My only friend through teenage nights 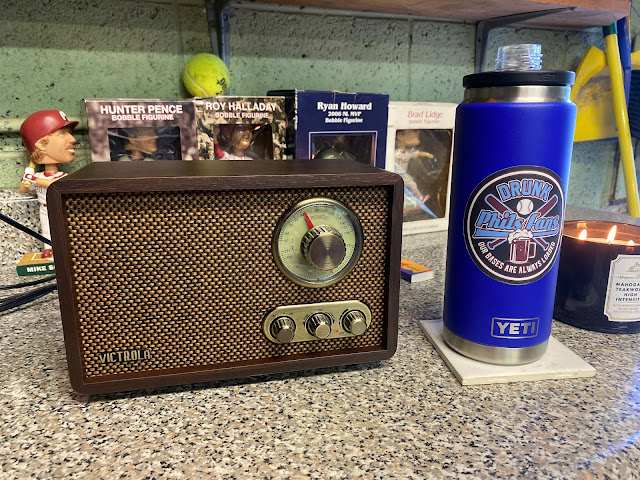 There is something nostalgic and simple about listening to baseball on the radio. It hearkens back to a time in my life when things were easier. If I was not attending a game, I would prefer to listen to it on the radio, preferably on my front porch in the Summerdale area of Northeast Philly. I wasn't alone in doing this, as many of my neighbors were doing the same thing. I could walk around my entire block at night and not miss a play, because I knew Mrs. Narwich had the game on. So did Mr. Fox, who was about 10 houses down. The neighborhood was alive with the sounds of Harry and Whitey all summer.

My parents always joke with me saying they were the first 2 voices I heard, but Harry and Whitey were probably the next 2. I probably actually listened to Harry and Whitey more. I mean that figuratively and literally. What made the radio so cool to me then was more by necessity than by choice. When the Phillies went onto cable or pay TV, we simply did not have cable, so if I wanted to follow the game, radio was free and we had one of those!

I have recently shunned TV and almost exclusively listened to the Phils on the radio. I have cable and WiFi and 10 devices that I could watch it on. So the radio today is by choice. I like to use my imagination about where exactly the pitch went. I do not need that ridiculous strike box. I picture in my mind the pitcher looking in, taking the sign and throwing one low and away on an 0-2 count.

My wife recently bought me a vintage-style radio with a dial. No digital readouts or bass boost,BlueTooth nonsense. The radio plugs into the wall and I have to meticulously turn the dial to get just the right amount of clarity. I believe listening to a baseball game on the radio is best done outside the house. We have a stand-alone garage that I have recently rehabbed. Now don't get me wrong, it is not dry-walled with hardwood flooring and LED lights. It is basic, clean, and simple. Just like baseball on the radio is to me.

Part of the switch to radio is that I prefer the announcers. Franzke and LA are the best in the business. I do miss not hearing Kruk talk about food all game and generally making fun of himself. However, the other TV announcers are WAY TOO chatty and annoying overall. I also do believe that deep down TMac is a Mets fan, which is unforgivable. Now LA doesn't do many games anymore, but Franzke is more than enough to sure up the broadcast, even if it is Bourne or Stocker on with him. Murph did an exceptional job leading into the All-Star game and I hope he gets more opportunities. I liked his camaraderie with Scott and think he would be the perfect replacement for LA when he chooses to retire.

I was so wrapped up in 4K, surround sound video broadcasts of games that I generally did not listen to the games on the radio unless I was driving. I did not realize how much I loved the radio and missed it. I urge you to turn off the tube or tablet and take a single game in on the radio out under the sky, on your front steps, or in your garage. Preferably with a cold beverage of your choice in your hand.