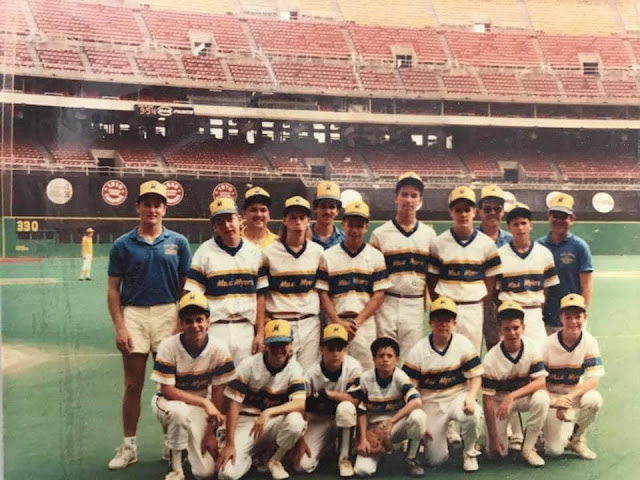 In baseball, you can be defined as a traditionalist, a progressive, or maybe somewhere in between. I enjoy the stats and numbers that baseball is defined by, however, the complete shift to analytics is something that has gone too far for me. There are no bunts, steals, hit and runs, contact, moving the runners along in baseball much anymore. I miss that aspect of the game and wonder if the baseball brand I played is now a relic. I want to tell that story and focus on a particular team and coach from my young playing career.

My young life was very weird. I lived in Oxford Circle, went to grade school in Port Richmond and played sports in Bridesburg. This meant I had friends at a young age in many parts of the city. It also meant that the school friends weren't the neighborhood or sports friends. I didn't have that consistent connection to my neighborhood that most of my local friends had. I was somewhat of an outsider at first in school and sports because every other person lived in that community.

I played for Bridesburg because that is where my Dad grew up and my grandmother still lived there. Bridesburg was a good connection and experience for me overall. People knew my Dad, we have a Polish last name and that made things a bit easier for me there. My first coach in travel baseball was Frank Swanson. Frank headed up the rec center there and also was a connection to allow me to get my first job at Gold Medal Sporting Goods when I was 15.

We had a decent team at Bridesburg and Frank was a good coach. I was just much more serious about baseball than most of my teammates. Practices were unregimented. The other kids on the team did not seem to care much if we won or lost. This frustrated me and allowed me to feel further different and often "act out". I was giving 100% and tried to do everything I could to help the team win. We did win the NE Department of Rec Championships when I was 9 and 10, but I was unsatisfied.

My Dad saw what went on at practices and games, heard my displeasure, but I would work hard outside of practices and we won so I stayed at Bridesburg another year. When I turned 11, I decided to move up with the 12-14 team and a different coach. This was not my worst experience in baseball, but it was really close. Again I found that the teammates didn't care as much as I did. Practices again were just nonsense. The kids on the team were more concerned with chasing girls, drinking, and anything but baseball. That was not me. I wanted to get better and I felt even at that young age that Bridesburg was not the place for me any longer.

That winter I had talked to my Dad about switching teams/ I wanted to play for a winner and to maybe be closer to Oxford Circle. The previous season my Bridesburg team had played a very good team, Max Myers. They seemed to have their act together, made very few mental mistakes and had what seemed to me like 10 coaches. The odd part was that my Bridesburg team beat them in the championship in prior years when I was on the 10-12 team.

I felt like somewhat of a free agent that winter and I knew I was not going back to Bridesburg. Would it be Max Myers? Fox Rok? Lawncrest? All had good teams, but I wanted to play for Max Myers. My Dad and I found out when signups were and decided it was a good decision. It was closer to my house, had a great team and I figured the 10 coaches likely ran a better team.

I can still remember walking into Spruance School where the signups were. I was cocky, but still nervous. Would I fit in? Would I play to my potential? Would anyone like me, because I was NOT someone who was kind or friendly to opposing teams or players ever. At the table was the head coach and a man who changed my perception of baseball. He knew me and when he saw me, I do not think he knew why I was there at first. I said I was done with Bridesburg and wanted to have a chance to play with his team at Max Myers. Years later the coach told me that he knew that a good team was going to be great and he felt like he hit the lottery. I am not 100% those were the exact words, but this is my story, so I hope you give me some leverage.

The coach was Sid Burstein. He was strict, kind, knowledgable and welcoming. I knew things were different IMMEDIATELY. I was handed a 40-page Xerox copy of different situations and where each fielder was expected to be, who was the cut-off man was, and where the pitcher should be. It was a handbook of almost every situation that would arise in a game. This was EXACTLY what I craved and needed. Practices were regimented. We ran through all of these situations time and time again until we got it right. Batting practice wasn't just trying to hit bombs the whole time. Sid would call out hit and run and we were to target the right side of the infield as a right-hander. For someone who loved baseball, this was heaven.

The team took to me pretty quickly overall. Max Myers was close to my Oxford Circle home, but most of the team was Jewish and I was raised Catholic. I wasn't sure if this would be weird for them or me and it turned out it was not at all. I found the entire team to be welcoming to me and my parents. I became friends with my teammates outside of the field. Most of what we did outside of the field was baseball related. Batting cages, baseball in the schoolyard, and VERY often it was a group of us getting together for our own team-led practice. I really was in baseball heaven.

Sid was patient with me and I fully realize then and now that I was not easy to deal with. Heat-of-the-moment frustrations with myself, the opposing team, umpires, my own teammates, and coaches often had to be de-escalated by Sid. I can say that after almost every game, I was taken aside and told that the way I behaved was not good for me, the team, or anybody. Over and over again. Here is an example: We were playing a good team with a very good left-handed batter up. A man was on 2nd and we were up by a single run. Time was called and Sid came out to tell me to walk the batter. It was the right move at the right time and I disagreed. My macho bravado wanted to get the guy out myself. I knew I could and hated the feeling to give someone a free base. The catcher stood up, had his closed fist towards the right-hand batter's box and I wound up and hit the batter. I should have been removed from the game right there. When I came in after the inning, I was rightfully berated for what I did. I was adamant that I did what the coach wanted in the way I wanted and saved myself 3 pitches. It was an asshole move that I am still embarrassed about today.

Sid preached fundamentals and defense. We practiced each of those over and over to where it became second nature. His attention to me as a player and person is something I hold dear and appreciate to this day. His message of not showing as much emotion on the field also got through...eventually. I thought you needed to show outward "fire", but was shown and told that there are better ways of doing things. If the umpire didn't give you a call, he was more likely to give you the next one if you didn't show him up. If a teammate made an error, you don't berate him out loud, but maybe encourage him and "pick him up". That will make you a better teammate and increase the synergy of your team. Thank You for all those lessons, Sid. They served me well in HS, College, and in life in general.

This brings me back to baseball today. Will the pendulum swing back to a more fundamental game where contact is appreciated more than a .215 hitter with 40 HRs, but 200 K's? Will trying to move a runner over from 1st with no outs be applauded over swinging for the fences? Will throwing strikes win out over throwing 100 pitches in 5 innings with 10 K's? Will the Max Myers and Sid Burstein philosophy of Fundamentals and Defense return to baseball? I sure hope so, because I miss those days.